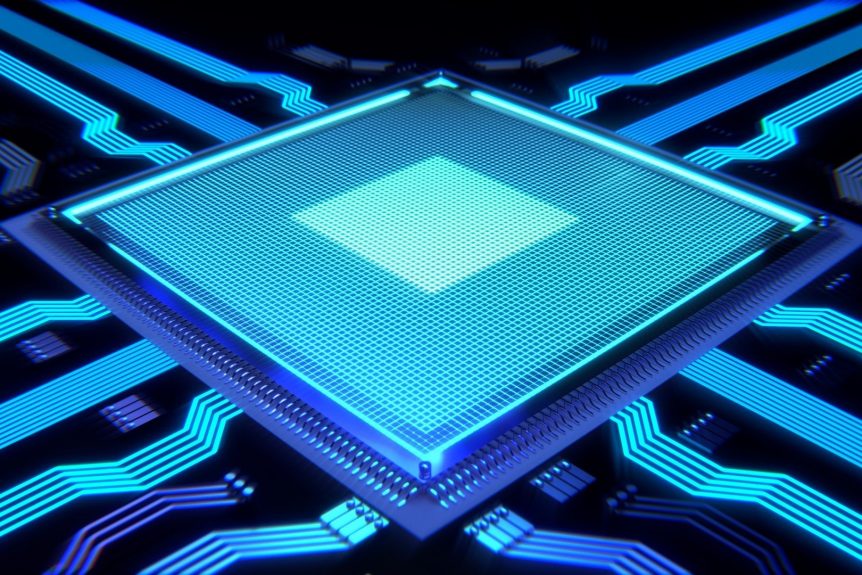 The CPU is the brain of your computer.

And Fortnite is a CPU intensive game.

So when there is a lot of building and fighting your CPU usage is very high.

In a lot of cases, your performance in Fortnite is actually CPU bound and not GPU bound like a lot of other games.

Upgrading the CPU in your system alone can dramatically improve your performance in Fortnite.

Here you’ll find the best CPUs you can get for Fortnite today as well as useful information to help you make the right choice.

Now is a great time to get a CPU because there are a bunch of excellent options at different price points.

Of course, if you want to get the best performance in Fortnite you’ll want to get a powerful graphics card as well as a CPU. Here are the top graphic cards you can get for Fortnite.

If you’re happy with your current CPU and don’t want to upgrade right now, a new graphics card can help to improve your performance in Fortnite.

The Intel Core i9-9900k is the best CPU that you can get for Fortnite right now.

This CPU is a popular choice among the best Fortnite players and streamers in the world.

Of course, you also want a CPU with high clock speeds.

The base clock of the i9-9900k is 3.6 GHz and this can be overclocked to 5.0 GHz. But you’re going to need a beefy cooler, such as the Dark Rock Pro 4, to reach and maintain those clock speeds.

The i9-9900k has 8 cores and 16 threads with very good multi-thread performance, so it’s good for productivity as well.

But this CPU is expensive and only recommended for those that want the absolute best gaming performance in Fortnite and are willing to pay a premium for it.

Now the single-thread performance isn’t as good as Intel’s i9-9900k, so it will perform roughly 4% worse in Fortnite. But you do get 50% more cores and threads.

And the Ryzen 9 3900X itself is cheaper than the i9-9900k and it comes with the Wraith Prism RGB Cooler, so you make some significant savings at a small cost in gaming performance.

Where this CPU really shines is in its multi-thread performance, which is about 30% better than that of the rival Intel Core i9-9900k.

While a high core count and strong multi-thread performance hasn’t typically been well utilized in gaming, Fortnite has made significant improvements to its multithreaded rendering and how it handles CPUs with multiple cores.

Particularly with DirectX 12 now being supported in Fortnite, you could see the performance of the 3900X actually surprassing other CPUs.

And if you plan to use your computer for more than just playing Fortnite, for example, if you’re a streamer or content creator, the Ryzen 9 3900X makes a lot of sense because you get top performance.

The Ryzen 7 3700X is a superb CPU at a competitive price.

The single-thread performance is excellent, so it’s great for gaming. And it has 8 cores, 16 threads, and fantastic multi-threaded performance.

In other words, the Ryzen 7 3700X has the same number of cores and threads as the Intel Core i9-9900k while offering comparable gaming performance and you can get it for more than 30% cheaper.

A notable feature of the 3700X is the energy efficiency. Because the TDP is just 65 Watts, you will save money on energy over time with this CPU.

It also comes with the Wraith Prism LED cooler, which is suitable for the 3700X at stock speeds and even for a moderate overclock.

Overall, AMD’s Ryzen 7 3700X is an excellent CPU that matches the performance of the competition at a cheaper price.

But don’t let low-end fool you because the performance of the 3600X in Fortnite is fantastic for the price.

It has 6 cores and 12 threads, and that seems to be the sweet spot for gaming right now.

And with the 3600X, you get the Wraith Spire LED cooler, which is a little better than the Wraith Stealth cooler you get with the non-X variant.

The AMD Ryzen 5 3600X offers much better single-threaded performance than the 1000 and 2000 series of Ryzen CPUs, so you can get improved gaming performance with this latest series at a good price.

The AMD Ryzen 5 3600 is a great value CPU. It’s cheaper than the 3600X and the performance in Fortnite is similar.

The major difference is that the 3600 is clocked a little lower at a 3.6 GHz base clock and 4.2 GHz boost clock, and it comes with a slightly worse cooler in the Wraith Stealth.

Now the Wraith Stealth is fine if you’re not planning to overclock, but if you do plan on overclocking heavily then you’ll want to get an aftermarket cooler.

If you’re stuck in choosing between the 3600 and the 3600X, I would suggest you get the 3600X if you don’t plan on overclocking because it has a better stock cooler and base clock speeds.

But if you do plan on overclocking and getting an aftermarket cooler, then get the 3600 because you will be saving money and getting similar performance at a better price.

The AMD Ryzen 5 2600X is an older CPU from the previous generation of Ryzen.

Included with the 2600X is the Wraith Spire Cooler, a fine cooler for playing at stock speeds, and a better cooler than you get with the non-X variant.

The 2600X is more than capable of playing Fortnite while doing some tasks in the background such as streaming.

And because this is an older CPU from the previous generation, you can get good performance at a cheap price.

Depending on the latest price, the Ryzen 5 2600 can have the best price to performance of any other CPU when you take into account that it has 6 cores and 12 threads. So the price per core is ridiculously cheap, too.

When choosing between the 2600 and 2600X, you want to consider the current prices because sometimes they are available for a similar price.

The AMD Ryzen 5 1600 takes us back another generation and because it’s an older CPU you can sometimes get it for a very good price.

This is another 6 core and 12 thread CPU with good single-thread and multi-thread performance, so it’s great for gaming and productivity.

In terms of performance, the Ryzen 5 1600 performs about 12% worse than the 2600 in Fortnite. But depending on the current prices, it can be a better buy in terms of value.

You could also consider the AMD Ryzen 5 1600 AF. This is basically an upgraded version of the 1600 that performs more like a 2600.

The AF version is harder to get, but if you come across one on sale you can consider yourself lucky.

The AMD Ryzen 3 3200G brings us back to the current generation of Ryzen processors.

The 3200G is a 4 core and 4 thread budget CPU with a 3.6 GHz base clock and 4.0 GHz boost clock that offers good single-thread performance for the price.

But this processor is great value for money when you consider that it comes integrated with a Vega 8 GPU, so you could use this in a budget build without a dedicated graphics card.

Bear in mind that the integrated graphics benefit from high-speed dual-channel RAM, so get that if it’s in your budget.

But if you already have a graphics card, then I would suggest getting one of the other CPUs mentioned in this post.

Of course, you’re not going to get high frames per second when you play Fortnite with an integrated graphics card. But if you lower your settings and resolution, Fortnite will at least be playable.

The 3200G is a good choice if you want a PC now but don’t have the money for a graphics card because you can add one later.

The Ryzen 3 2200G is another 4 core 4 thread budget CPU with good single-thread performance.

In terms of performance, the 2200G is about 5% worse than the 3200G in Fortnite. But depending on the current prices, it can be better value.

Like the 3200G, the 2200G also comes with Vega 8 integrated GPU, so you don’t need a dedicated graphics card. But you do want to get high-speed dual-channel RAM.

And as was the case with the 3200G, the 2200G is a good option if you don’t have a graphics card right now and plan to get one in the future.

But if you do already have a graphics card, then it’s worth spending a little more to get one of the other CPUs as the extra cores and performance is worth it.

Now that we’ve gone through all the best CPUs you can get for Fortnite, let’s take a look at how the performance compares between each CPU.

Frames per second (FPS) is typically used to measure the performance of graphics cards, but this isn’t possible with a CPU.

So instead, we will be using a scoring rating out of 100 to measure the relative performance in Fortnite of each CPU.

And now that we know the gaming performance of each CPU, we can work out the value for money using the current prices.

Bear in mind, the price of computer hardware can change on a daily basis depending on if there is a sale on and the retailer that you’re using at a particular time.

Also, this chart does not take into account the value of any additional cores, integrated graphics, or included coolers.

As you can see, in general the more expensive a CPU is the less value you get for your money.

What is the best CPU for Fortnite?

If all you do is game and you’re sole interest is getting the best performance and highest frames per second when you play Fortnite, then the Intel Core i9-9900k is the best CPU you can get right now.

But the i9-9900k is very expensive and offers poor value for your money.

The Ryzen 7 3700X has the same number of cores and threads as the i9-9900k, but it’s much cheaper and the performance in Fortnite is comparable.

For most people, I think that the Ryzen 5 3600 is going to be the perfect CPU for Fortnite. It’s a serious improvement in the single-threaded and gaming performance over older Ryzen CPUs and beats anything in its price range and even rivals much more expensive processors.

If you’re looking for the best value for your money, then you will struggle to beat the Ryzen 5 2600 or Ryzen 5 1600. The one you should get will depend on the current prices.

And for those on a budget and looking to build a PC without a graphics card, the Ryzen 3 3200G or Ryzen 3 2200G are great choices and offer a path for later upgrades. Again, the one you should get will depend on the current prices.