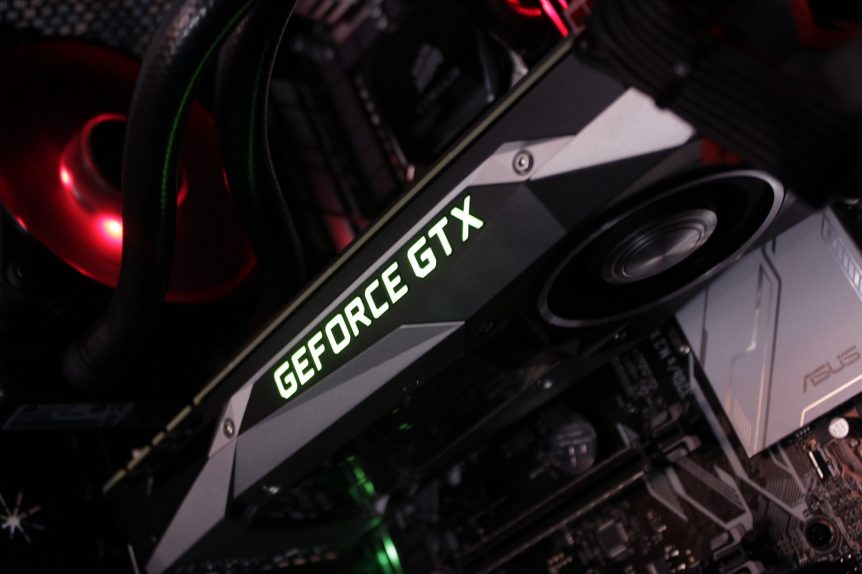 Are you looking for a graphics card to give you the best performance when you play Fortnite?

Your graphics card is usually the most expensive part of your computer.

So it’s important that you have all the information you need to make your decision.

If you’re in a hurry, you can use these links to jump to a section:

Here you’ll find the best graphics cards that you can get for Fortnite today as well as useful information like the expected FPS to help you make the right choice.

So whether you’re looking for the most expensive and powerful graphics card you can get or you’re a more budget-conscious buyer and want the most for your money, you will find a graphics card that’s perfect for you when you read this post.

Of course, if you want to get the best performance when you play Fortnite, you’ll want to pair your graphics card with the best CPU.

Using a powerful graphics card with an old or weak CPU is going to seriously restrict your performance and stop your system from running to its full potential. Here are the top CPUs you can get for Fortnite today.

The RTX 2080 Ti is the best and most powerful graphics card that you can get for Fortnite right now.

This graphics card is the most popular choice among the best Fortnite players in the world, with roughly a third choosing the RTX 2080 Ti over any other card.

You see, the top Fortnite players know how important it is that you have a graphics card capable of outputting the highest frames per second possible, particularly in hectic end games situations.

Look, the RTX 2080 Ti is the flagship offering from Nvidia. But it comes with a hefty price tag.

For gamers that want the absolute best performance when you play Fortnite, this is the one to get.

So if you’re looking for exceptional performance, without having to spend over $1,000 for an RTX 2080 Ti, then the RTX 2080 Super is a great choice.

So the boost clock is actually higher for the 2080 Super when compared to the 2080 Ti, but it has roughly 30% fewer CUDA cores.

This graphics card is more than capable of pumping out an average of over 240 FPS in Fortnite, so it’s a perfect pairing if you have a high refresh monitor.

The best way to think about the RTX 2080 Super is like a refreshed version of the previous generations 1080 Ti (another superb graphics card) because the performance in Fortnite is very similar.

Because of the pricing of the RTX 2080 Super, it doesn’t make any sense to go with a standard RTX 2080, so we’re going to step down in our next graphics card.

You can think about the RTX 2080 Super as a refreshed version of the 1080 Ti because they perform similarily in Fortnite.

Stepping down from the 2080 series, we have the RTX 2070 Super, which was made to compete with the latest offerings from AMD.

This is an excellent card that offers comparable performance to any of the 2080 cards, but because we’re stepping down a series you get the performance at a much more reasonable price point.

So you still get excellent clock speeds with the 2070 Super, with about 16% fewer CUDA cores.

The 2070 Super is the cheapest graphics card you can get that’s capable of outputting an average FPS of over 240, making it an excellent choice if you have a high refresh monitor.

And much like the case with the 2080 Super, the pricing and performance of the RTX 2070 Super means that the standard RTX 2070 doesn’t have a logical place right now, so we’ll be skipping it and stepping down again.

The RTX 2060 Super is an excellent graphics card at a competitive price point.

It’s an upgraded version of the RTX 2060, featuring more CUDA cores, a higher boost clock, and an extra 2GB of VRAM.

At this price point, it’s main competitor is the AMD RX 5700XT. The RTX 2060 Super has better thermals and performs slightly worse in general for most titles.

But because Fortnite prefers Nvidia cards the RTX 2060 Super outperforms the AMD RX 5700XT. The AMD RX 5700XT is a great graphics card, but if you want a card at this price point and are interested in getting the best performance in Fortnite, then you should get an Nvidia card.

The RTX 2060 offers excellent performance for the price.

The biggest difference between the RTX 2060 and RTX 2060 Super is the amount of VRAM.

You see, the RTX 2060 has 2GB less VRAM. But Fortnite isn’t the most VRAM intensive game, so even with the most graphically intensive settings, you’re going to be absolutely fine with the 6GB of VRAm with the RTX 2060.

The main graphics card that competes with the RTX 2060 at this price point is the AMD RX 5600XT. And as we’ve already discussed, Nvidia cards are better than AMD cards in Fortnite.

>> Click here to view the Nvidia GeForce RTX 2060 on Amazon.

The GTX 1660 Ti is a step down from the other graphics cards mentioned so far in a sense that it doesn’t have Ray Tracing.

But because Ray Tracing hasn’t really found its way into games in general at the moment it really doesn’t serve any purpose, especially in Fortnite that doesn’t rely on particularly real-life graphics.

So the GTX 1660 Ti is a very good graphics card, offering excellent performance for the price.

The GTX 1660 Super offers good performance for the price.

Much like the 1660 Ti, you don’t get Ray Tracing with this card and that’s not a big deal-breaker at the moment especially for Fortnite players.

There really isn’t a huge difference between the 1660 Ti and Super, so choose the one that fits your budget the best.

The GTX 1650 Super brings is into budget territory.

The GTX 1650 Super is well-priced and is very efficient. So because it uses less power and generates less heat, you will save some money when you use this card.

So you lose some performance in comparison to the other cards, and you also lose another 2GB of VRAM.

But, as you know, Fortnite isn’t the most intensive game for your VRAM. So as long as you’re playing on 1080p resolution (which you should be with this card) then you’ll be absolutely fine with the GTX 1650 Super.

The Radeon RX 570 is the final card on this list and the first graphics card from AMD.

Look, while AMD may have some great graphics card in the mid-high range, none of them make sense for Fortnite because of the engine preferring Nvidia graphics card.

But AMD does have better offerings in the lower tier of cards, especially the RX 570 and RX 580.

So you get more CUDA cores with the RX 570, but because the boost clock isn’t as fast as the other cards, you lose some performance.

The RX 570 is the ultimate budget card and offers the best cost per frame of any card on this list.

For those looking for the best value for money, go with the RX 570.

Now that we’ve covered all the best graphics cards you can get for Fortnite, let’s take a look at the frames per second (FPS) you can expect to get from each card.

We’ll be looking at how each card performs at both high and low settings at 1080p resolution.

Bear in mind that your FPS largely depends on what’s happening during a game. For example, in a hectic end game scenario with a bunch of players building, you’re going to get less FPS than if you were in a blank Creative map and looking at the sky.

Also, the number of FPS you experience may differ depending on the quality of your system as a whole.

So take these numbers as a rough guideline only to help inform your decision.

Now let’s take a look at low settings. These would be using the settings that competitive players would use in Fortnite to get the most performance possible.

It shouldn’t come as a surprise to you that the best and most expensive cards have the highest FPS.

It’s useful to consider the price of each graphics card in tandem with the FPS so we can work out the respective cost per frame for each card.

As you can see, the more expensive cards are less efficient in terms of their cost. In other words, the higher tier graphics cards cost more per frame.

So it goes. That’s the price you pay for top performance.

But it’s important to bear in mind that the prices of cards (and therefore the cost per frame) can vary depending on a number of factors.

For example, there may be a big sale on a particular card and at that time it could have the best cost per frame and make the most sense for you to buy.

You want your graphics card to be able to output a high number of FPS. Because a high FPS can help Fortnite feel smoother and improve your aim and building.

How to choose the best graphics card for you

As you know, your graphics card is the most expensive part of your PC and it’s the part that’s responsible for giving you the best performance and highest frames per second when you play Fortnite.

You want your graphics card to be able to output a high number of FPS because more FPS can actually make you better at Fortnite.

But how do you decide?

Obviously, not everybody has thousands of dollars to spend on a graphics card. An RTX 2080 Ti, for example, can cost more than someone’s entire PC build.

Look, your goal when buying any PC parts should be to get the best possible performance for your money. So because your graphics card is going to be the most expensive component in your PC, it’s going to eat up most of your budget.

But I recommend you stretch your budget to get something better. Let me explain why.

As you know, a gaming PC is a big investment and you want to get the best parts you can possibly get. But you don’t want to be disappointed or feel the need to upgrade in a few months.

So when you stretch your budget and get something a little more expensive you will get a graphics card that you can be happy with over many years.

And this can actually work out cheaper over the long-term in comparison to upgrading your graphics card every generation.

What is the best graphics card for Fortnite?

If you want to get the highest possible frames per second when you play Fortnite, then the best graphics card you can get right now is the RTX 2080 Ti.

On average, the RTX 2080 Ti will get you over 300 FPS in Fortnite when you use low settings. And because it has a massive 11 GB of VRAM, this card will future proof you for many years.

But if you want a graphics card that can get you 240 FPS to match your high refresh monitor without having to break the bank, then the RTX 2080 Super or RTX 2070 Super are your best choices.

For the best 144+ FPS card, then I would recommend the RTX 2060 since it offers excellent performance at a very reasonable cost per frame.

When you get down to the best budget choices, any of the Nvidia GTX cards are a good choice.

But if you’re looking for the absolute best bang for your buck card, then the RX 570 offers an unbelievable cost per frame, while still getting you over 60 FPS even with high settings in Fortnite.