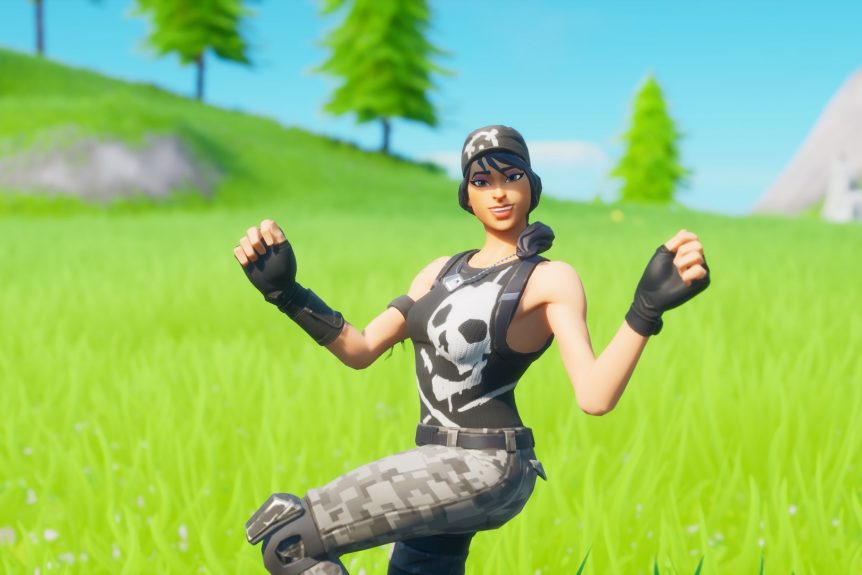 But most of the best Fortnite players are actually males in real life.

So why are they choosing to use female skins?

Do the pros know something that we don’t?

And do female skins really give an advantage in Fortnite?

As you know, female skins are smaller than male skins.

And a common Fortnite myth is that female skins have a smaller hitbox than male skins.

If female skins had a smaller hitbox, then they would be more difficult to hit and grant a competitive advantage.

But this isn’t true.

You see, all skins in Fortnite have the same size hitbox, regardless of the size of the skin.

Of course, female skins are clearly smaller and this does give an advantage, but for a completely different reason.

Fortnite is a third-person shooter game and your camera is looking over the shoulder of your camera.

So your vision of the map and of enemies is restricted by your character model. When you use bigger and bulkier skins it becomes more difficult to see, particularly when you try to aim down sites (ADS).

This is why skins that are naturally large and take up a lot of space are not used in competitive tournaments. For example, Brutus, a Chapter 2: Season 2 Battle Pass reward skin.

Just look at how much space this skin takes up. You will not see a Fortnite pro using Brutus in a tournament because he’s too big and blocks much of the screen.

Obviously, vision is very important in Fortnite and you want to be able to see as much as possible so you can gather information.

The importance of vision is also why most pros no longer use a stretched resolution in Fortnite since it reduces your field of view (FOV).

It’s all about perception

One advantage of using female skins may be due to the perceived hitbox size.

You see, when a skin looks smaller, then it will appear to you as being more difficult to hit, even if you logically know the hitbox size is the same.

So you may be more likely to miss your shots on a smaller skin as a result of this psychological factor.

This is evident with the Aura skin, which may be the most competitive Fortnite skin because she is skinny and takes up little space. And a lot of Fortnite pro players choose to use Aura for this reason.

Something else to consider when selecting your skin is that you’re going to be looking at it for the entirety of the game. Or, at least, the back of the skin.

So Fortnite pro players may simply choose to play with female skins because they prefer the look of them.