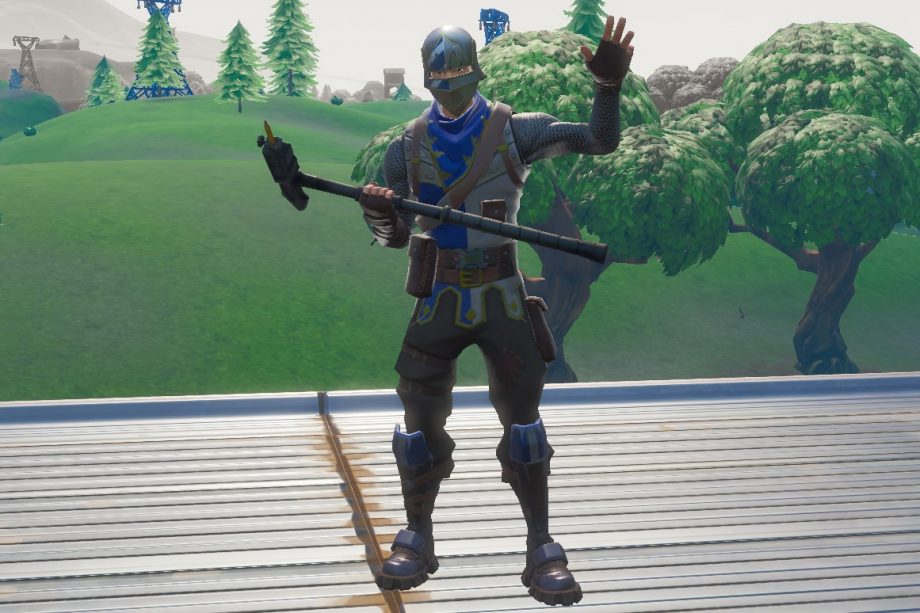 There are literally hundreds of Fortnite skins.

And each skin has its own rarity.

But today I’m going to show you some of the real rarest skins in Fortnite. Skins that I bet you haven’t seen in over a year of playing Fortnite.

You could buy Renegade Raider in Fortnite Season 1 for 1,200 V-Bucks.

But you needed to reach level 20 before you could buy it.

Listen, the number of Fortnite players in Season was way lower than it was it is now. So very few players had an opportunity to buy Renegade Raider.

Therefore, it’s one of the rarest skins in Fortnite today.

And when you see a Renegade Raider in-game, you can be sure the player has played Fortnite since 2017.

Recon Expert is a skin that doesn’t get a lot of attention for the way it looks because it’s modest and assuming.

But it’s not the looks that’s so impressive about Recon Expert. It’s rareness.

Listen, it’s been over 600 days since we have seen Recon Expert in the Fortnite Item Shop. Think about that.

Have you ever seen this skin in-game?

There’s no reason Recon Expert won’t return, of course. Since it’s not an exclusive skin.

But for now, it’s probably the rarest skin in Fortnite.

Like Recon Expert, we haven’t seen Ghoul Trooper in the Fortnite Item Shop for over 600 days.

Ghoul Trooper, however, is a much more aesthetically pleasing skin. So it’s safe to say that more players would have bought it at the time.

Moreover, Ghoul Trooper has been featured over 10 times in the item shop. And there’s still a chance it could return for Halloween 2019.

Because you could only buy Aerial Assault Trooper in Fortnite Season 1 for 1,200 V-Bucks.

But you had to have reached level 15 (this is lower than the threshold for Reneage Raider which was level 20).

However, Aerial Assault Trooper is a much less impressive skin than Renegade Raider. So there’s a chance it could be the rarest skin in Fortnite.

Or, at least, rarer than Renegade Raider.

I’ve never seen an Aerial Assault Trooper in-game. Have you?

Recon Scout is another skin I’ve never seen before.

Or, at least, for over a year and I’ve forgotten about it.

You see, it’s been over 500 days since Recon Scout was in the Fortnite Item Shop. So, it’s a very limited skin indeed.

When is the last time you’ve seen it?

Of course, there’s every chance Recon Scout could return because it is not an exclusive skin.

Unlike some of the other skins in this post. Read on.

Codename E.L.F. is a Special Holiday Skin in Fortnite released in December 2017.

It features default Jonesy with wild hair and an elf costume.

But we haven’t seen Codename E.L.F. in the Fortnite Item Shop for over 500 days. Because it was not re-released in 2018 like Merry Marauder and Crackshot so it is one of the rarest skins in Fortnite.

We could, of course, see it again.

The Black Knight was the Tier 100 reward skin in the first Fortnite Battle Pass back in Season 2. The Black Shield Back Bling also came with this skin, making it one of the rarest Back Blings in Fortnite.

Fortnite Season 2 started 14 December 2017 and ended 21 February 2018. Obviously, the player account was a lot lower then.

And even if you bought the Battle Pass, you weren’t guaranteed to get to Tier 100 to unlock the Blck Knight.

You see, back then the Battle Pass was different because there were no weekly challenges.

This made it more difficult to rank up since you had to sign in almost every day to get to Tier 100.

I was actually playing Fortnite back then and owned this Battle Pass. But I didn’t get to Tier 100 because I was on holiday for most of the season.

Which is a bummer because I really like the Black Knight skin.

Oh well. At least I have the worm.

The Royale Bomber skin is an exclusive skin available as part of a PlayStation 4 bundle back in the Summer of 2018.

Because the PlayStation 4 is a fairly old console and Fortnite is a free-to-play game, not many people were willing to spend hundreds of dollars to get Royale Bomber.

But if you did, you would now own a very rare skin indeed.

I’ve heard you could also get Royale Bomber by purchasing a special PS4 Dualshock 4 Wireless Controller. And that’s a lot cheaper than buying the console.

However, I haven’t seen this deal.

Singularity was the reward in the Season 9 Battle Pass once you collected 90 Fortbytes.

Moreover, you could unlock additional styles by finding helmets on the map.

Of course, the player count in Season 9 was very high. So a lot of players would have bought this season’s Battle Pass.

But how many players do you think collected 90 Fortbytes to unlock Singularity?

Not many, I think. I didn’t collect enough Fortbytes because I found it was obnoxious, tedious and boring.

I admit I regret it now because Singularity is a really nice skin. At least there’s a statue of Singularity in Fortnite I can look at instead.

Omega was the Tier 100 reward in the Fortnite Season 4 Battle Pass.

Season 4 was when Fortnite was at peak popularity.

So certainly many players bought the Battle Pass and got to Tier 100 to unlock Omega. But how many unlocked the alternate color styles?

But season level 80 requires hundreds of thousands of points in experience and a lot of hours played. Obviously, it’s much harder to reach than Battle Pass Tier 80.

So I don’t think many players unlocked the alternate color styles for Omega and that it is a rare skin.

Moreover, in the Seasons that followed the release of Omega, Epic Games changed how you could unlock the alternate variants of skins. Let me explain.

Instead of requiring you to reach the level requirement within the particular season, you could unlock it whenever you want.

For example, with progressive Tier 100 skins like Ragnorak in the Season 5 Battle Pass, you could unlock the extra styles even after the season had ended.

Meaning other Tier 100 skins aren’t as rare but Omega is (or, at least, the alternate colors are).

Grimbles is a creepy gnome that we have seen in the Fortnite Item Store just once.

The Grimbles skin may be inspired by the You’ve Been Gnomed Meme.

I guess Grimbles didn’t sell very much and Fortnite decided not to release it again. Of course, there’s every chance they will because it’s not an exclusive skin.

Sparkle Specialist was also in the first Fortnite Battle Pass in Season 2.

As you know, this is the same Battle Pass that had the Black Knight.

And more players would have unlocked Sparkle Specialist because the tier requirement was lower (56 vs. 100). So Black Knight is obviously a rarer skin.

But Sparkle Specialist is still very rare. When is the last time you’ve seen one?

Of course, we have Sparkle Supreme in the Fortnite Season X Battle Pass. But it’s not the same.

Galaxy is a skin that you could redeem by buying the Samsung Galaxy Note9 or Galaxy Tab S4.

These devices cost hundreds of dollars.

Unsurprisingly, not many players were willing to spend hundreds of dollars for a Fortnite skin that grants no competitive advantage. And you got 15,000 V-Bucks with the Galaxy skin.

So it’s a rare skin which I doubt we’ll see again.

Double Helix is another skin that you could get as part of a console bundle.

But this time the Nintendo Switch.

Here is another instance where you have to spend hundreds of dollars for a skin. So not many players are going to own Double Helix.

Listen, I’ve never seen a double Double Helix in-game, but that could be because I don’t play with a Nintendo Switch. Have you seen Double Helix before?

You might recognize Double Helix because it is a recolor of Archetype.

It’s a shame it isn’t a more unique skin.

You could buy Rogue Agent as part of the very first Fortnite Battle Royale Starter Pack.

But how many are playing now that bought Rogue Agent? Not many, I’m sure.

The interesting thing about Rogue Agent is that it made a return to the Fortnite Item Shop. You could buy it in September 2018 for 1,500 V-Bucks.

So it was priced as an Epic skin and players were outraged because Fortnite re-released a skin they believed to be exclusive. And thought Fortnite might re-release other Battle Pass skins

But because Rogue Agent was priced so expensive, I don’t think many players bought it.

We have not seen Rogue Agent in the item shop since.

And I don’t think we will again.

In this post, you have learned about some very old skins.

Some you haven’t seen in over a year.

And some we will never see in the Fortnite item shop again.

Exclusivity and discontinuity are what makes some of these skins so rare. In other words, you can and never will be able to get them again.

So I have not included so-called exclusive skins like Merry Marauder and Skull Trooper because we have seen them re-released. And it’s likely we’ll see them again so Fortnite can make more money.

You see, exclusivity is one of the reasons you want these skins so much. Click here to learn about the psychological triggers in Fortnite.

Of course, you could buy an account that owns some rare skins. But that is risky because the person could scam you.

So I don’t recommend it. Remember, you should only buy Fortnite items and V-Bucks from the official item shop or Epic Games website.

If you own some rare skins you should enable Fortnite 2FA to keep your account safe and secure.

How many rare Fortnite skins do you own?

And when is the last time you’ve seen one?