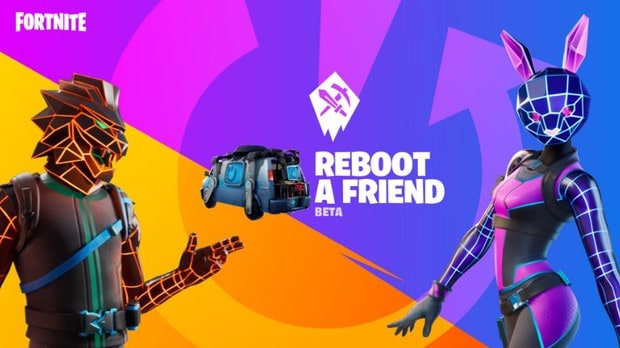 Do you have friends that no longer play Fortnite?

With the Reboot a Friend program you can earn rewards when you play Fortnite with an old friend.

Currently, Reboot a Friend is in beta and you can only reboot friends that haven’t played Fortnite for 30 days or more.

How to reboot a friend

First, head over to the Reboot a Friend website.

Now you’ll see a list of the eligible friends that you can reboot. Select one of your friends to reboot.

Note that you can only reboot one friend at a time.

Once you’ve selected a friend to reboot, you have an option to swap to another player. You can swap to any player, as long as you haven’t already rebooted them.

When you swap you will keep everything you already unlocked, but you will lose the games played progress and will have to start again, and you cannot go back to a previously rebooted player.

What are the rewards for rebooting a friend?

When you play matches with the friend you rebooted, you can unlock different tiers of rewards. Both you and your friend will receive the same rewards.

Here are the rewards you can unlock in the Reboot a Friend beta:

Rewards will be issued to all winners within 7 days.

You can find the full Reboot a Friend rules here.

Epic Games are always looking for new ways to get and keep users playing Fortnite.

Usually, that means new skins in the Item Shop, crossovers with relevant things in pop culture, or the latest subscription offer in Fortnite Crew.

But the Reboot a Friend program is the first time I’ve seen a game encourage and reward players for bringing back friends that used to play.

This makes a lot of sense, right?

As you know, Fortnite has changed a lot since it was first released. So if you started playing back in Chapter 1, for example, then you’ll know that the game is completely different now.

Heck, even this latest season is totally different from last season because there has been a ton of changes.

You see, Fortnite is consistently evolving. So if you have some friends you haven’t played with for weeks, months, or even years, then now is the perfect time to bring them back because you both can get rewards with the Reboot a Friend program.

You could also rediscover the reason you and that particular friend used to play together so much.

Epic Games sure know how to make this game compelling.

Anyway, I hope that the new Reboot a Friend will allow you and many others to reunite with an old friend that you haven’t played with for a long time.

So make sure you have some fun together and get some Victory Royales!