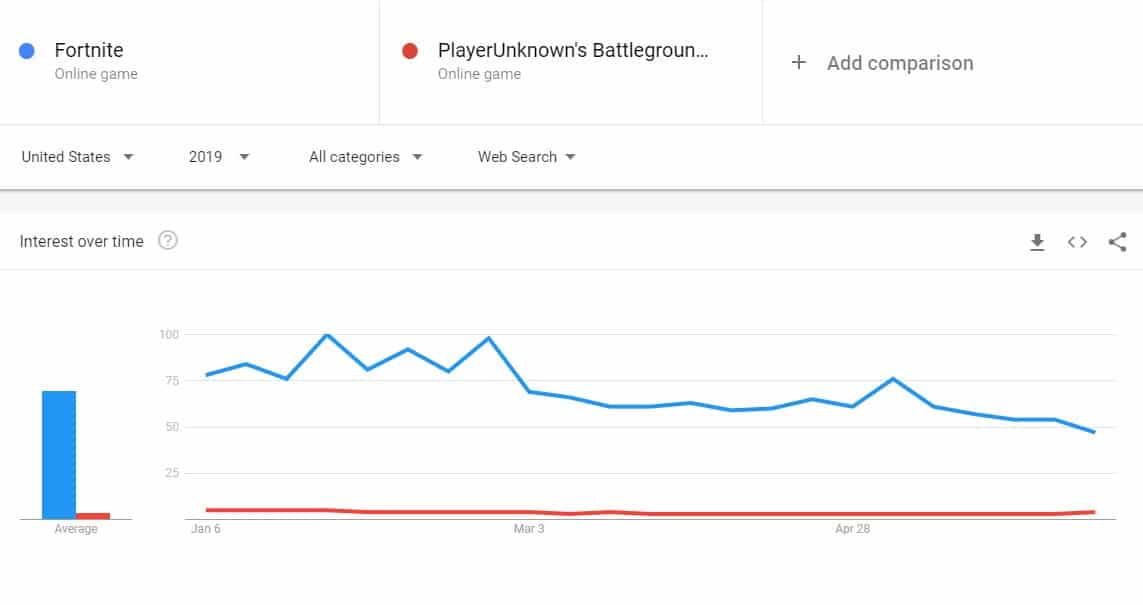 Fortnite and PlayerUnknown’s Battlegrounds (PUBG) are two of the most popular games within the Battle Royale genre.

But which game is most popular?

Well, we can answer that by using Google Trends. A free online tool that lets you analyze search terms in Google.

You see, according to Google Trends, Fortnite is a lot more popular than PUBG. In the United States, at least. And we’ll go into that in more detail in just a moment.

But for now, let’s go back some years to 2017. Back when PUBG was the hottest game in the world and dominated the viewer numbers on Twitch.

You see, PUBG started out ahead because it had been out longer and had a larger player base.

And then along came Fortnite with the release of its free to play Battle Royale version.

So, the popularity between the two games was very close at the end of 2017.

But, as time went on, Fortnite began to catch up.

Do you see that big spike of growth for Fortnite?

That’s when Drake and Ninja played Fortnite together in March 2018 and broke the viewership records on Twitch.

It looked like the battle of the Battle Royales had come to an end. With Fortnite emerging with the victory royale.

Now, however, we are in 2019. And things are starting to look interesting again.

Listen, not only can you use Google Trends to analyze search terms in the United States, but you can look at Worldwide trends, too.

PUBG is catching up to Fortnite in 2019

The above chart shows the worldwide search popularity for Fortnite vs PUBG in 2019.

Now, that looks a lot different from the previous chart that only showed the United States, doesn’t it?

What appears to have happened is PUBG is increasing in popularity. While Fortnite is on the decline. Some even think that Fortnite is dying.

But Google Trends lets you go even deeper because you can see which countries each game is most popular in.

Would you like to know what countries PUBG and Fortnite are most popular in?

Here are the countries where PUBG is most popular

So, now you see that Fortnite is most popular in Western countries like the United States and Europe.

And PUBG, on the other hand, is most popular in the Eastern countries. Countries like Russia and certain regions of Asia. For example, China and South Korea, are big gaming countries. And they have a very high population, too.

Of course, Fortnite is more popular when you consider the worldwide search trends. But that’s according to Google Trends. And Google Trends is limited to the data from Google.

In other words, we can’t see the data from other search engines that aren’t Google.

Yes, Google is the leading search engine with over 5.6 billion searches per day. So, it serves as a good indication for the popularity of a game in general. Especially if you are a citizen of a Western country like Europe or the United States, for example.

But it doesn’t tell the whole story.

What are the differences between Fortnite and PUBG?

As you know, Fortnite and PUBG are both Battle Royale games.

However, despite that, they have a number of differences.

So, you see, they are quite different.

That’s why it came as a surprise, then, when PUBG tried to sue Fortnite. Because PUBG felt Fortnite their concept.

Of course, Battle Royale games existed long before PUBG did.

But PUBG’s claim was that Fortnite copied how it’s 100 players that drop from the sky to fight on a map that gets smaller over time.

The lawsuit was eventually dropped.

What is going to happen in the future?

Listen, when PUBG first released it had a lot of problems. It wasn’t well optimized and when the console version came out on Xbox it was a disaster.

You see, PUBG required a very powerful (and expensive) PC to play PUBG. So, it wasn’t accessible to everyone.

So it’s no surprise then that when Fortnite came along with a totally free to play Battle Royale that ran well on older PCs and consoles that it took most of the player base.

However, today things are different.

Today PUBG runs a lot better. And it has been extremely successful with its mobile version.

Fortnite, on the other hand, has gone from a game that runs very smooth to a game that, well, doesn’t.

Fortnite releases a new patch every week and that means a lot of new content has been added over the 2 years since its release. And because of the sheer amount of content, the game has become harder to run, especially on console.

Pro Players and Streamers have also expressed negative opinions about where Fortnite is headed. And, as you know, many people think Fortnite is dying.

But, no one knows the future. Not even Google.

In a year’s time from new, both games could be dead and we’ll all be playing something else.

Is it Fortnite or PUBG? Let me know in the comments below!