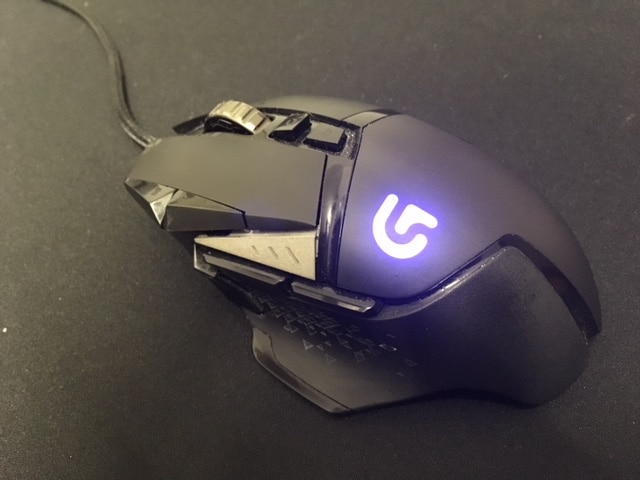 The Logitech G502 is one of the most popular gaming mice for Fortnite.

And even has its own subreddit with over 8,000 subscribers, /r/G502MasterRace.

Also, it’s priced extremely competitively and is regularly on sale. I recommend checking Amazon for the most up to date price (link to Amazon).

The most notable user of this mouse was Ninja, before making the switch to Finalmouse’s Ultralight Phantom. Now he has his own mouse, the “Air58 Ninja”, also by Finalmouse.

Admittedly Ninja owning and playing with the G502 (at the time) was a big factor – certainly bigger than it should have been – in my decision to purchase the mouse. Watching him play Fortnite using it was honestly majestic.

What interested me the most was that Ninja had bound all of his building pieces to the mouse. This made building in Fortnite look so easy and effortless.

Naturally, I thought that if I just had the same mouse then I too could play like Ninja.

Unsurprisingly, I was wrong. It turns out there’s a lot more to being a great player than just the mouse.

It’s been over 6 months since my purchase of the Logitech G502. I have been regularly playing Fortnite since and am still nowhere near as good as Ninja (or any other pro player for that matter).

So I’ve got a pretty good understanding of this mouse and have formulated my own opinions, which I’ll get to in a moment. But firstly let’s look at some facts and try to understand why this mouse is as popular as it is.

What Makes The Logitech G502 So Great?

There are four main factors to consider when purchasing any mouse for gaming; size, sensor, weight and buttons. Let’s start with arguably the main selling point of the G502: the buttons.

The Logitech G502 has 11 programmable buttons. Yes, eleven! That is a lot of buttons. I wasn’t entirely sure how Logitech could fit so many buttons on a mouse without it being obstructive.

Somehow they managed to do it.

I should point out that the left and right click technically count as programmable buttons. Although I can think of no good reason as to why you would ever want to reprogram those.

Still, all of these extra buttons are amazing for Fortnite. And that’s because, in Fortnite, there’s a lot of things that need to be bound to a key.

So if you’re someone that’s finding it difficult to find a set of keybinds that work, the Logitech G502 might be a good fit for you. There’s very few mice that can allow you to bind all of your building pieces to it and even have some left over.

Where Are All Of The Buttons On The Logitech G502?

There’s two side mouse buttons – like you’d expect from a typical gaming mouse – and these can be easily pressed with your thumb. As well as an additional side button that rests just on the tip of where my thumb holds the mouse.

Just to the left of the left click there’s another two buttons. These allow you to shift the DPI either up or down.

Then there’s maybe my favourite thing about the G502: The scroll wheel.

The scroll wheel can actually be used as 3 buttons. This is because it can either be pressed down (like most mice) but also to the left and to the right as well!

There’s also a button that changes how the scroll wheel functions. This gives you the option between a single click precision scroll wheel or a fast continuous free scrolling wheel. With the latter being absolutely tremendous for scrolling through especially long webpages.

Personally, I’ve never seen a scroll wheel utilised like this on a mouse before and it is seriously impressive. It feels really robust, too. I didn’t think something as simple or menial as a scroll wheel could be quite so impactful.

Logitech have truly outdone themselves here.

Of course, all of these buttons can be remapped to whatever key you would like using the Logitech Gaming Software (which I’ve explained at the bottom of this page).

As I mentioned earlier, a lot of the reasoning for purchasing the G502 was simply because I knew Ninja used it. And he owned with it.

I really didn’t give a lot of consideration to some of the things that I should have, i.e. the size.

According to the product page, the G502’s physical dimensions are:

My hands are quite small and I didn’t even measure them to ensure that they would be at all compatible with the mouse. This was a mistake.

For reference my hands are about 17cm (or 6.69 inches) in length. I think that the G502 is slightly too big for me and in hindsight a smaller mouse probably would have been better for me.

You live and you learn. But I urge you to not make the mistake that I did!

There’s really not a lot I can say here. I’m no mouse expert but I know that the G502 uses an excellent sensor.

In fact I’m just going to quote directly from the Logitech G502 product page as it’s explained better and more succinctly than I ever could:

G502 comes equipped with the PMW3366 optical sensor with zero acceleration, smoothing, or filtering across the entire DPI range (200-12,000DPI). That means you get exceptional tracking accuracy and consistent responsiveness no matter what sensitivity you set the mouse to

I’ve encountered no issues with the sensor on this mouse.

For FPS games or a competitive shooter (like Fortnite) the general consensus is that you want a mouse that is under 100 grams.

The Logitech G502 weighs 121 grams, not including any cable. There’s also 5×3.6 gram optional weights you can put into the mice to add an extra 18 grams to it.

I know a lot of users use it without any weights and then there are some that actually like the extra weight. Personally I use it without any of them and I don’t know why anyone would want to make this mouse heavier than it already is.

For reference the G403, another very popular gaming mouse from Logitech, weigh in at 87.3 grams. And the lightest mouse available right now, the Air58 Ninja, weighs in at just 58 grams – that’s less than half of the G502!

Although there are a lot of users that say they like the extra weight and claim that it helps steady their aim. At the end of the day, it’s all personal preference.

The Logitech G502 is a really, really good mouse. When I was unboxing it I knew that I had received something really quite special.

For every day use you really cannot go wrong with it. It has a top sensor and functionality that no other mouse in the market can match. Plus the scroll wheel is fantastic.

However I do not think that this mouse has its place in a fast paced shooter in Fortnite – especially if you want to play at the highest level.

As time goes on it looks like less and less pro Fortnite players are using the G502. Instead they are opting to use lighter mouse with the typical two side buttons.

In fact I don’t even use any of the extra buttons that the G502 provides anymore for my Fortnite keybinds. I just use the two side mouse buttons that almost all gaming mice nowadays come equipped with.

So if I were looking to buy a new gaming mouse, it would definitely not be the Logitech G502. But it could be great for you, particularly if you want a mouse with a lot of extra buttons.

Click here to see the latest price on Amazon.

If you’re interested in learning more about this mouse then I suggest you check out the review by Rocket Jump Ninja. He probably has the best and most comprehensive mouse on the whole internet. You can also check out his top 40 list by clicking here (P.S. The G502 didn’t make the list)

If you own or have owned the G502 then I’d love to hear what you think. You can either message me directly by using the contact form or by sending me a tweet (@imkr4m). I don’t have many followers so I’ll definitely reply 🙂