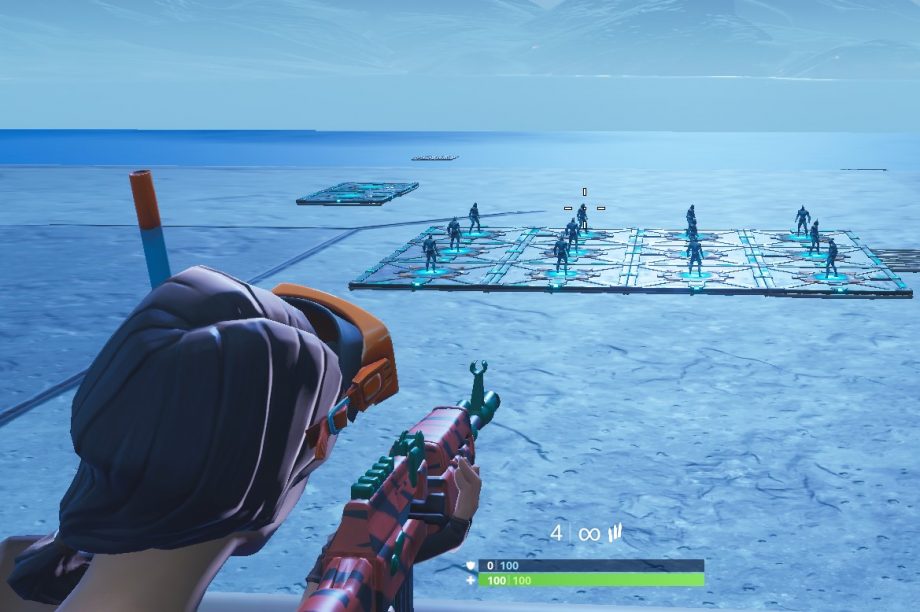 Many players use ‘bloom’ to describe everything about Fortnite’s shooting mechanics.

But this isn’t quite right.

You see, in Fortnite you have crosshairs and your bullets will land somewhere inside the area.

Bloom is how your crosshairs will expand or shrink depending on the action you take. For example, moving, jumping or firing your weapon increases the area where your bullets could land.

So bloom increases the randomness of your shots in Fortnite. And many players blame bloom when they miss their shots.

Some shooters, like Counter-Strike: Global Offensive (CSGO), use recoil as a way to control weapon accuracy. And players can control recoil by moving their aim in the correct direction.

Firing your weapon in Fortnite will have some recoil, and bloom helps to further simulate the effects of recoil.

The purpose of this post is to show you how you can minimize the effects of Fortnite, so your aim is less random and you can hit more of your shots.

How to reduce your bloom

The higher rarity weapons in Fortnite have increased accuracy and less bloom.

But you cannot reliably get a legendary weapon in every game you play.

So in this section, we will discuss some things you can do to keep your crosshairs small and your aim precise.

Of course, you already knew that.

So now it’s time for some lesser-known and advanced ways you can control bloom.

Listen, many times you will find yourself behind cover and you’ll want to peek to take a shot at an enemy. When you peek quickly you could take no damage and this technique is known as ghost peeking.

But what players do wrong when ghost peeking is they aim down sites the entire time.

Instead, you should aim down your sites after standing up. Doing this will apply first shot accuracy a lot sooner so you’re far more likely to hit your shot.

I especially like to use this technique when I have a hand cannon because the bloom can be quite large.

This next technique is useful when you’re using a heavy assault rifle.

Because the heavy assault rifle applies a lot of bloom and your crosshairs will get very large as you continue to fire shots. And it will take a long time for the bloom to reset and for your crosshairs to return to the regular size.

But you can quickly reset your bloom by swapping to your shotgun and then back to the heavy assault rifle while aiming in the entire time. It’s best you have your shotgun in a good slot in your inventory for you to easily switch to.

You don’t actually want to pull out your shotgun, either.

Just swap to it for the animation to begin, and then cancel it by immediately switching to the heavy assault rifle again.

When done right, you will lose no time and you can continue to shoot as normal.

And with reduced crosshair size.

What weapons does bloom apply to?

Almost all of the weapons in Fortnite use the bloom mechanic. For example, assault rifles, sub-machine guns, pistols and so on.

This is by no means an exhaustive list as the number of weapons in Fortnite is always changing because of how frequently the game is updated.

You can move and jump and fire from the hip with your shotgun and the effects of bloom are fairly minimal. So it’s worth you strafing and jumping when dueling with a shotgun in a close-quarters fight.

Yes, doing this will increase your crosshair size and decrease your accuracy. But the added movement means you’re less likely to get hit.

And sometimes not getting hit is just as important (if not more important) than hitting your shots.

Now that’s briefly covered the weapons in Fortnite that do apply bloom, let’s take a look at the weapons where bloom has no effect.

So only a small and unique set of weapons in Fortnite do not apply bloom.

But the majority of weapons do. That’s why it’s important you’re familiar with how bloom works.

And the ways you can reduce its negative impact on your aim, as we’ve already discussed.

As you know, bloom can increase the size of your crosshairs and make your shots more random.

And many players will blame bloom when they miss a shot.

This creates a problem of responsibility. In other words, who is to blame: The player or the game?

You see, it’s very easy to blame something else when things aren’t going our way.

But more often than not it’s the bad aim of the player that was the reason for the shots not connecting. Not bloom. Because if your crosshairs aren’t even close to the enemy then you cannot expect the shots to hit.

I can’t tell you how many times I thought my aim was perfect and I thought bloom was to blame. Then I would watch the replay back to realize how bad my aim was.

Sometimes it’s difficult to admit we did something wrong or made a mistake because we don’t want to harm our ego.

Another problem bloom creates is when aiming for headshots. As you know, hitting an enemy in the head in Fortnite does more damage (usually double damage).

So it makes sense for you to aim for the head.

But contrary to what you think is right, aiming for headshots could be a bad thing. Let me explain.

A character’s head in Fortnite is small (or at least relatively small compared to the body) and because of bloom, you could be more likely to miss your shot entirely when aiming for the head.

Obviously missing your shot and doing zero damage is not your goal. So is it better to aim for the body instead?

Well, not really. As you wouldn’t benefit from the bonus damage headshots grant.

Here’s what pro shooter players do: They aim for the neck. Oftentimes without even realizing it.

The reason you should aim for the neck is it creates more of a ‘buffer’. In other words, your shots have a better chance of connecting with either the head or the body.

Even when bloom does take effect.

Whether you like bloom or not, the fact is that it exists in Fortnite.

And it doesn’t look like it’s going to be removed or changed, either.

So you’re going to just have to learn to live with it.

Generally speaking, I do not like bloom in video games and I feel it’s a cheap mechanic.

But I think bloom works well in Fortnite because it’s a Battle Royale and you can build. And if every weapon had 100% accuracy it could result in a poor experience.

Bloom also creates some interesting opportunities for outplays. You see, all players have bloom and you can use it to your advantage.

For example, imagine you’re getting your walls sprayed down by an aggressive enemy holding down the shoot button. Well, they’re going to have large crosshairs as a result of bloom applying.

In other words, it’s going to be hard for them to actually hit you when you come out from behind cover.

Whereas your crosshairs are going to be small, so it would be a good time to return fire as the odds will be stacked in your favor.

Anyway, that’s all I have to say about bloom in Fortnite.