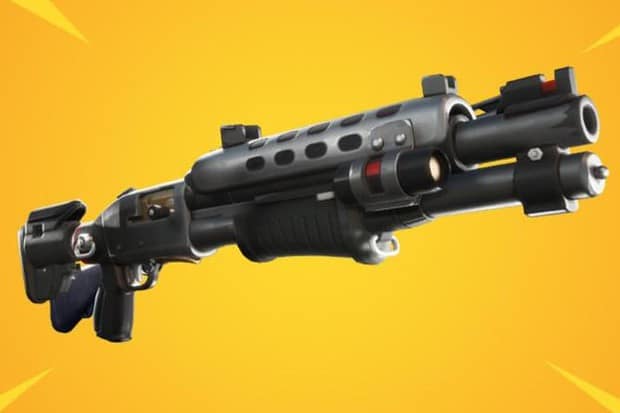 In Fortnite Chapter 2, the number of weapons has been reduced.

Now you only have two shotgun choices: the pump shotgun or the tactical.

But which one should you use?

In this post, we’re going to compare these two shotguns at different rarities. And looking at how the damage trends over different distances.

Then we can create a tier list, so you’ll always know which shotgun to use when you play Fortnite.

Before getting into the more detailed comparison, let’s first take a look at the general differences between these shotguns. Starting with the pump shotgun.

As you know, the pump shotgun is more like a “burst” weapon. In other words, it does a high amount of damage but it has a low fire rate.

Because the pump has a low fire rate, you’ll want to carry a submachine gun as part of your loadout (or another weapon with good sustained damage). So you can switch weapons to finish enemies off after landing a shot with the pump.

The benefit the tactical shotgun has is that you don’t necessarily need to carry a submachine gun in your inventory. Because it does good sustained damage itself you won’t need to switch weapons.

As a result, you can carry a different and potentially more useful item in your inventory instead. You only have 5 inventory slots, so this is actually important.

Score 1 for the tactical shotgun.

Score 2 for the tactical shotgun.

The final thing to note is the headshot multiplier for each shotgun.

Score 3 for the tactical shotgun.

But how do they compare in the head-to-head?

It makes sense to compare the shotguns in increasing rarities, don’t you agree?

So let’s start with the common (grey) pump and tactical shotgun.

Since these are the shotguns you’re going to encounter most frequently when you play Fortnite (as they are common weapons) this is really important.

Listen up, the damage of a common tactical shotgun is higher than a pump shotgun.

Therefore, you should choose the common tactical shotgun over the pump every time because the common pump is the worst shotgun in the game.

Reddit user bergovgg did an interesting comparison of the Fortnite shotguns, looking at the damage over different distances measured in tiles.

I put his data into a spreadsheet and created graphs. So you can see how the damage of each shotgun trends over different distances.

For simplicity, I’ve only graphed the damage of a body shot. Take a look at this graph now:

As you can see, the tactical shotgun does more damage than the pump at all distances.

And because it has a higher headshot multiplier, it’s always going to do more damage.

Now let’s see how the two shotguns compare at the uncommon (green) rarities:

This time the pump shotgun does more damage than the tactical shotgun, but only 6% more.

And at this damage threshold, you’re not going to 1 shot an enemy with full health and shields with a pump shotgun. Even if you hit all the shells to their head.

Let’s look at the graph, to see how the damage trends over different distances:

As you’d expect, the pump shotgun does more damage at the close distances.

But as you move further away from your enemy, the damage of the tactical starts to get better.

Because the tactical shotgun has a higher headshot multiplier I recommend you choose the uncommon tactical over the pump.

Things start getting more interesting at the rare (blue) rarity.

(Rare rarity, does that even make sense?)

You see the damage of the pump shotgun is now starting to get ahead of the tactical. But it’s still not enough to one-shot an enemy with full health and shields.

Now take a look at the graph:

This time, the choice isn’t so clear cut.

But I’m going to award the tactical shotgun as the winner at the rare (blue) rarity.

I don’t think the damage increase of the pump (13%) is enough to make it the best choice.

At least not yet.

At Epic and Legendary rarities, the tactical and pump shotguns get a new look. The tactical resembles the Benelli M4 and the pump shotgun appears to be a Franchi SPAS-12.

This is why you’ll commonly hear players refer to Epic and Legendary pump shotguns as a SPAS.

And in regards to the stats, things start to get more interesting, too.

Now the pump shotgun does 20% more damage per shot than the tactical. And the damage is enough to one-shot an enemy with full health and shields.

And what about the damage over time?

As you can see, the damage gap between the pump and tactical at close distances is starting to grow in favor of the pump.

But the tactical still does very well at distances further away, with a more flat damage falloff.

Still, the pump beats the tactical at Epic rarity because the damage is high enough to one-shot full health and shield enemies.

And finally, it’s this the battle of the two highest rarity versions of the shotguns.

Here the damage of the pump shotgun really starts to pull ahead, doing more than 25% more than the tactical.

At this level, even a body shot from either shotgun is enough to do devastating damage.

Let’s take a look at the last graph to get the full picture of how the damage trends over different distances:

Now the pump shotgun is starting to look better, even at further away distances.

Therefore, at legendary rarity, the pump shotgun beats the tactical.

Now we’ve had a good look at each shotgun at each rarity. And had a chance to compare the damage over different distances.

This list will start from the best shotgun, all the way down to the worst:

Of course, you could have a particular preference for one shotgun over the other. So you may choose not to strictly follow this tier list.

For example, some players will prefer the tactical because they don’t want to change weapons to finish off enemies.

But, this list should serve as a good guide, and I think it will be about right for most players.

Shotguns are arguably the most important weapon in Fortnite because of how often fights will go to close-quarters combat as a result of using building to close the gap.

In other words, you’re always going to want to have a shotgun in your inventory.

And I hope from reading this post, you now have a better understanding of which shotgun to choose at each rarity. So you can optimize your loadout and win more games.

I’m really happy Fortnite has reduced the number of weapons in general, and the shotguns in particular.

You see, in Season X we had 4 shotguns to choose from. The drum, the combat, the pump, and the tactical. At one point there was also the heavy shotgun.

Fortnite does not need that many shotguns. It makes the game needlessly complicated.

So now we are left with the two original shotguns with very clear use cases. The tactical has a faster fire rate and a higher DPS. And the pump has higher burst damage and one-shot potential.

Of course, the best shotgun depends on the rarity, as you now know 🙂