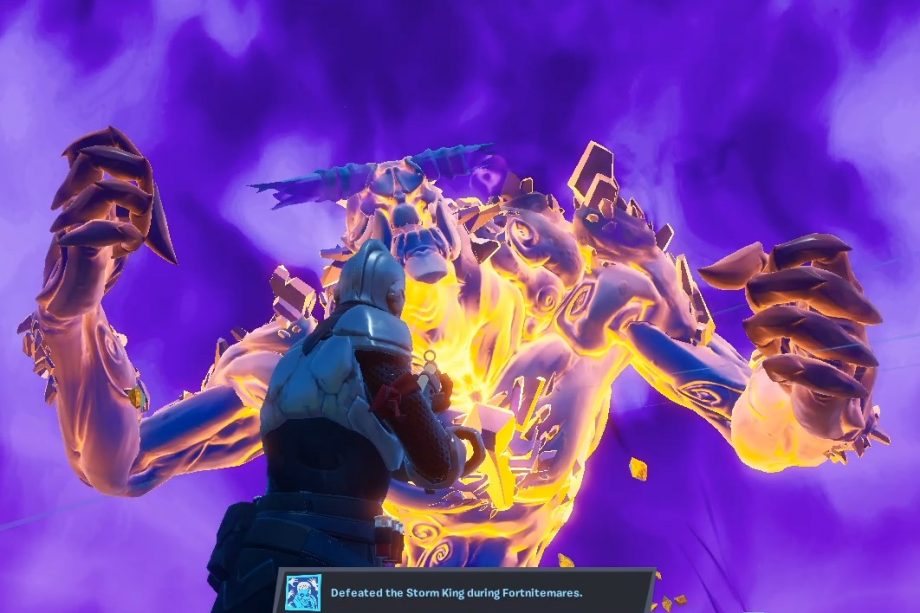 It’s Halloween, so Fortnitemares is here.

And we have a new LTM mode: Storm King.

Your goal is to defeat the Storm King by shooting at his weak points when they appear.

Once you’ve taken out some of his weak points, you will then have to take out his horns. You will unlock a new medal in your punchcard when you destroy the first Storm Horn.

And after destroying the first Storm Horn, you will go through some more waves. Then you’ll take out his second horn (and upgrade your medal).

Finally, the Storm King will be glowing yellow, and this is where you can damage him at any point. And when his hitpoints hit 0 he will be defeated and you will have won.

Well, this game mode is a lot harder than you would think. The first game I won lasted about 17 minutes.

It took me a few attempts before I could figure out a reliable method for winning in this game mode.

And I know a lot of players are struggling, too.

So in this post, I want to share with you some useful information I wish I knew before I started playing. To help you get the Nitemare Royale a little easier and unlock the new Storm Sail umbrella.

The most dangerous attack the Storm King has a beam he fires in a line. It’s like a laser that does a ton of damage and can even shoot through your builds.

This is the number one way players die in this game mode.

You will be able to see when the Storm King starts to charge his laser. Then you’ll know roughly what direction it is going and it’s time for you to get out of the way, fast.

You’ll notice a number of storm vents on the island that you can use to move around quickly. So make sure you’re positioned near one. These saved my life more times than you would think.

It is actually possible to survive the beam attack even if you get hit. But you’re going to need to be at full health.

So make sure you look for shields and top up with medkits throughout the game.

Because, even if you’re paying attention, you’re eventually gonna get hit by one of the beams.

The beam, however, is not the only attack the Storm King has at his disposal. Here are a few other tricks he has, and some ways you can survive them.

Of course, these aren’t the official names. But they’re the best I could make up with.

Storm King is an LTM you play with squads. And I recommend you select “fill” when you’re queuing up, even if you generally dislike playing with other players.

Hint: You can turn off voice chat in your sound settings if you don’t want to hear or communicate with your team.

But it is worth playing with some friends if you have some online, so you can communicate with them.

You see, the more players there are, the more damage you can do to the Storm King when his weak points appear. And more players will help take care of a lot of the zombies.

Remember, in Fortnite Chapter 2, you can pick up downed teammates and throw them to safety. This is especially helpful if one of your teammates has got blown into the storm because you can throw them back and revive them.

You can also carry your teammates to a storm vent to get them further away from any danger.

I was actually surprised by how players would immediately run to my aid when I got downed. I thought I would be left for dead because I couldn’t communicate with anyone else.

But it looks like the players in this game mode have a good understanding of what you need to be doing to win.

And to really drive home the point of how important your teammates are: I won my first game of Storm King because of my team as I died earlier in the game.

Make use of every item

In the Storm King LTM you’ll notice items are back that wouldn’t be in the normal game mode. Because the loot pool in Fortnite Chapter 2 has been reduced significantly.

So you’ll see healing items like Slurp Juices (heal you for 75 effective health over time) and Chug Splashes (throw them at yourself to get health/shield, you can also use them on your teammates).

And also traps like campfires (place them on the ground to gain health over time) and the mounted turret.

The mounted turret is actually pretty good for this game mode because it does 40 damage for every shot, and it doesn’t use ammo. You’ll want to make sure the structure you’ve built for it is strong enough so the zombies don’t knock you down, though.

And you’ll also want to wait until after the Storm King’s “spin attack” because it will destroy all structures (including your turret).

Another thing to bear in mind is that you’re completely stationary when using the turret. So setting it up near a bounce pad is a good idea so you can escape a beam attack when it’s aiming for you.

But often you won’t be in the optimal position to be able to hit the weak points. And that’s ok because you can still make good use of your time by taking care of the zombies.

The Storm King will start to summon spawn crystals for the zombies, and I recommend you attack these instead of the zombies.

Of course, the zombies themselves can drop a lot of useful things such as ammo. And it may be useful to turn on “auto pick up items” in your Fortnite settings so you don’t have to manually pick them up (and risk accidentally swapping out a weapon and spoiling the layout of your inventory).

But as you don’t gain any health or shield from killing zombies (like in the Battle Royale mode) you don’t want to spend too much time farming zombies when you could be doing more useful things to help your team.

Is the Storm King LTM worth playing?

You can earn a surprising amount of XP from playing the Storm King mode. Comparable to playing the usual Battle Royale mode.

You see, the XP you get for killing zombies and the medals you earn from destroying the Storm Horn really start to add up. And this XP is helpful for getting your Battle Pass to Tier 100.

But to earn the XP from the other Fortnitemares challenges, you’re going to have to play the Battle Royale mode. Because they aren’t unlockable in the Storm King LTM.

This guide by Erik Kain at Forbes will help you complete the “Search a chest in a haunted forest, a ghost town, and a spooky farm” challenge.

But the real reason for playing the Storm King mode is for unlocking the new Storm Sail umbrella.

I think it looks awesome with my Dream skin and Glpyhs contrail. What do you think?

You also unlock the King’s Wrath spray and a new banner that I don’t care too much for.

Did I enjoy the Storm King mode?

And not because it was a bad game mode.

Plus, I wasn’t playing with any friends, so maybe that was a factor.

I play Fortnite because it’s a PvP (Player vs Player) Battle Royale game with building.

And I’ve never been a fan of zombies in Fortnite, either.

However, the new way they’ve implemented them this year in the Battle Royale mode is quite interesting. They jump out randomly from houses and it’s actually quite scary.

I thought Fortnite was supposed to be a kid’s game?

Anyway, I’m rambling. And that’s because I’ve already exhausted all of the knowledge I have about the Storm King mode.