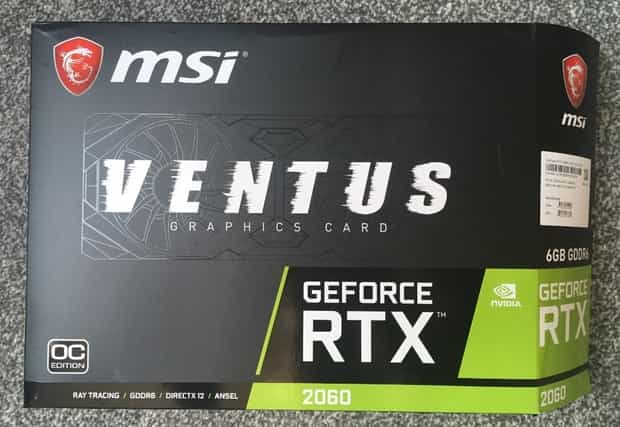 Your graphics card is one of the most important parts of your gaming PC.

Because it generally has the biggest effect on your performance when gaming.

And it’s usually the most expensive part, too.

The NVIDIA GeForce RTX 2060 (link to Amazon) is the latest in the Turing architecture released by NVIDIA in 2018.

Ray Tracing is a rendering technique to get the most realistic and lifelike graphics possible.

But it’s not well used in Fortnite because of the cartoon-like graphics.

So RTX is turned off because it can reduce your Frames Per Second (FPS) when gaming.

Moreover, you may be more familiar with the GTX family of NVIDIA graphics cards, since that is the standard naming convention.

And the GTX performance equivalent to the RTX 2060 is the GTX 1070 Ti. But the GTX 1070 Ti is more than 2 years old and uses the Pascal architecture.

Because it’s so old it’s (almost) impossible to buy new. However, you could get yourself a good deal if you choose to buy used.

Note that many of these cards may have been heavily overclocked or used for mining and this can reduce the life span.

In general, I recommend you buy new from a reputable store with a good return policy. So you can return your graphics card if anything were to go wrong.

In other words, you don’t want to spend hundreds of dollars on something that doesn’t work and have no money-back guarantee.

Both the GTX 1660 and GTX 1660 Ti are slower than the RTX 2060. But they are also cheaper and the performance decrease is roughly linear.

However, in Fortnite, the RTX 2060 outperforms the RX 5700 because Fortnite prefers NVIDIA GPUs.

The performance equivalent in Fortnite is the RX 5700 XT. But this card is a bit more expensive and is a similar price to the RTX 2060 Super.

This may not matter much because VRAM in Fortnite typically doesn’t go higher than 3GB even when playing with Epic settings.

Moreover, the AMD cards have worse thermals and are noisier. And they are less power efficient.

So you could end up saving more money over time by going for an NVIDIA card as a result.

What FPS can you expect with the RTX 2060

Your FPS is largely dependant on the CPU you’re using to play Fortnite.

As well as other components such as your RAM and so on.

Of course, I don’t know what the specs of your PC are.

This is great if you’re a competitive player because higher FPS can help improve your aim. And make the game feel smoother and better to play in general.

However, you will need to use a monitor with a high enough refresh rate (Hz) in order to see the extra FPS.

There are a lot of great graphics cards available right now.

Because there’s so much competition.

And competition is great for consumers as it means cheaper prices.

But with so much choice comes a lot of confusion about what to buy.

Here’s what you need to know: Fortnite is not the most graphically intense game and it prefers NVIDIA GPUs. And the RTX 2060 is a good choice at its price point.

Here are the links to Amazon for all the products mentioned in this post: