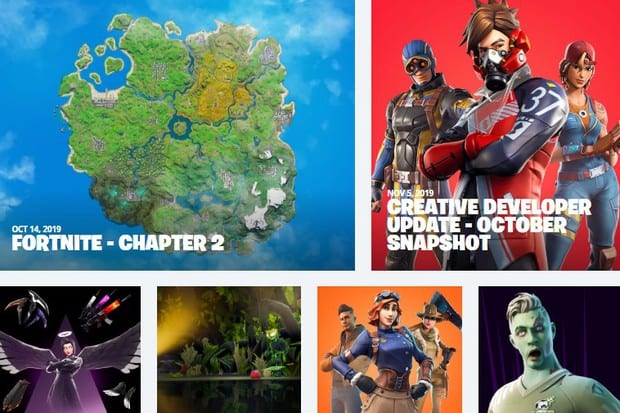 Fortnite gets a new update every week.

In other words, Fortnite is a little different every week, and these weekly changes really begin to add up.

You see, after a few months of consistent weekly updates, even small updates can produce large changes. Completely altering how the game is played.

Previously, when a new patch was released, Epic Games would produce a detailed write-up of all the changes and publish them each week on their website. So players could know exactly what was changed and adjust their playstyles accordingly.

And there would be an archive of all the changes, too. So you could look back on them to see exactly what has changed over time.

But, as of Fortnite Chapter 2 in October 2019, Epic has stopped releasing patch notes.

Well, at least for the Battle Royale mode (which as you know is the most popular version of Fortnite). Because it looks like Creative and Save the World are receiving some mention on the Epic Games website.

And what about the Fortnite Battle Royale that millions of us are playing every day?

How are we supposed to know what’s happening to our game?

And why is Epic no longer releasing patch notes for Fortnite?

Figure it out for yourself

Listen, when you first dropped into Fortnite Chapter 2, you noticed the map was entirely greyed out. In other words, you had to explore the map to find out all the new locations that were added.

This was interesting. It was different. I liked it.

This forced players to explore and engage with Fortnite in a new way. Instead of having the whole experience spoiled the moment you logged in.

Now it looks like Epic has taken this “explore the new world” concept a little too far by not releasing any information in the form of patch notes.

But this creates a whole new problem: A lack of transparency.

You must remember that Fortnite is the most popular shooter game in the world. And for it to be doing something as unprofessional as this is suspect.

And I’ve even been attempting to write some “unofficial” patch notes since they’re being withheld.

So you could say I’m doing Epic’s job 🙂

You can’t please everybody

When Fortnite would release patch notes, there were always a group of people that were dissatisfied with something.

Typically, this group of players were the ones to make the most noise. Creating posts regarding their dissatisfaction until they had influenced as many people are possible.

And then something would have to get changed.

You see, it’s the negative people that are usually the loudest.

It’s not often Fortnite or Epic would get praise for something they did right (which is actually quite often). But when they get something wrong, boy you’ll sure hear about it.

So, here’s a theory.

Maybe Fortnite stopped releasing patch notes because they were tired of getting hate every week for each update. So by not giving players a chance to object to the proposed changes, how could anyone be upset?

As you know, Fortnite has worked with psychologists to make the game more addicting. And the game uses some psychological tricks in the item shop to get you to spend more money.

So maybe Epic was advised to not release any patch notes because it could have benefits?

What we do know, however, is that players are upset because there aren’t any patch notes at all.

I really like these tweets from SypherPK that I think summarises the situation succinctly from one of the most popular Fortnite players in the world.

The point is this.

By not releasing patch notes, Fortnite is creating more buzz and talk than they likely would by releasing the patch notes.

Even though the comments are mostly negative, do you know what’s worse than being talked about?

It’s not being talked about.

Did Fortnite merely fire the person who used to write the patch notes and that’s why we don’t have them anymore?

I think this is a calculated move by Epic.

We know by this point that Epic are masters of PR. Just look at how they teased Fortnite Chapter 2 by literally destroying the old map, having it sucked into a black hole, and then turning the game off for 2 days.

You see, Fortnite is a gamechanger. They’re doing things differently. Much different.

And what’s more different than not releasing patch notes?

I expect they could return once players get disgruntled enough.

For now, though, it looks like you’re going to have to rely on information from third parties to stay up to date with the latest changes in Fortnite.

Or you can check the latest Fortnite community issues on the Trello board.

I’ll admit that this isn’t ideal. And I don’t think it’s the way it should be.

But it is what it is right now. And unless you plan to stop playing Fortnite entirely, you’re just going to have to deal with it.

What do you think about Fortnite not releasing patch notes?