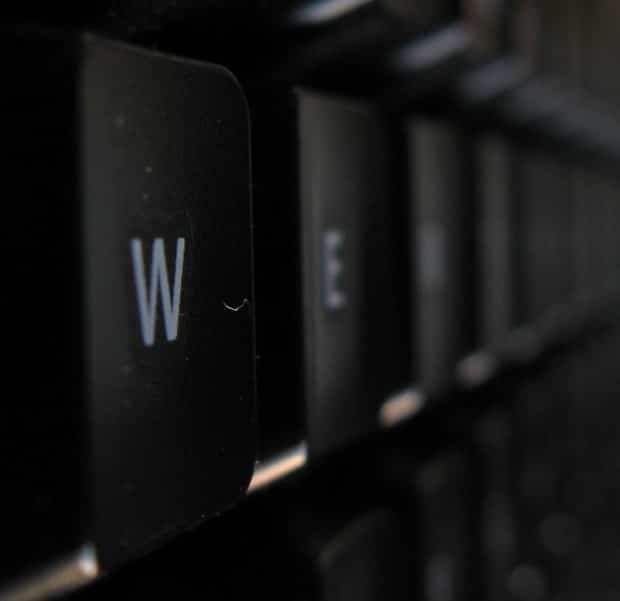 On a standard QWERTY keyboard, W, A, S, and D (WASD) are the keys you use to control the movement of your character in Fortnite.

You see, pressing the W-key is how you move forward when playing Fortnite on PC. And to W-key is to play very aggressive and run down your opponents.

The movement keys are ,AOE on Dvorak keyboards and ZQSD on AZERTY keyboards.

WASD has been the default movement keys on PC games for decades. And you are probably familiar with them.

In the very early days of PC gaming, the arrow keys were the movement keys. But they weren’t ergonomic and were difficult to press while moving a mouse with your right hand.

So, WASD became a thing and Half-Life (1998) was one of the first games to use WASD by default.

Another advantage of WASD is that it allows you to press many of the other keys surrounding it.

For example, you can use your thumb to press the Space bar and your little finger to press Ctrl or Shift.

And your index and ring fingers can press keys like Q, E, R, F and the numbers 1, 2, 3, 4, and so on. Which is helpful in Fortnite because there are so many keybinds.

What’s the problem with W-Keying?

And because there is no custom matchmaking in Fortnite, players have to queue up at a similar time and hope they get into the same game. This is usually done in a Discord server with one player counting down the time for when players should search.

Of course, this isn’t an exact science and not all the players searching will get into the same game. But, until Fortnite makes custom matchmaking keys available to everyone, it’s the best we can do for now.

The goal of a Fortnite scrim is to play against players of a high level. To prepare themselves for the Fortnite World Cup and other competitive tournaments.

So, Fortnite scrim players want to get as many players as possible to the end game circles. Because they want to simulate and practice those tournament scenarios.

But when a player is mindlessly W-keying it can ruin the whole purpose of the scrim.

You see, W-keying is not how you play in competitive Fortnite games, in general. Because you want to get a high placement to earn the most points possible.

And when you W-key in a Fortnite scrim you run the risk of being kicked and banned from that particular scrim lobby.

Now, I don’t think that’s fair. After all, you should be free to play Fortnite however you want. But it is what it is and, ultimately, you have to respect the rules of the scrim lobby.

When should you W-Key someone in Fortnite?

As you know, W-keying is when you play aggressive and try to run your opponent down.

But you should only W-key when you know you have an advantage and, therefore, have a high chance of getting the kill.

Otherwise, you run the risk of dying or getting yourself into an even worse situation. Which is sometimes just as bad as dying.

A good time to W-key someone is when you know you have a health advantage.

Listen, when you shoot an enemy your hitmarker will appear with a number showing the amount of damage you dealt. The color of the number will either be blue or white.

If it’s blue then it means your opponent has some shield remaining and you should avoid playing too aggressive.

But if a white hitmarker appears then that means your opponent has no shield. So, they are weak.

And because you know they are weak you can feel more confident when you go for the kill by W-keying them.

When you W-key in Fortnite, you best make sure you have the skill to back it up.

Yes, I believe in an aggressive playstyle is an effective way to play Fortnite.

However, there is such a thing as playing too aggressive. And this can lead to you getting punished.

So, you must find a balance.

And the only way to do that is by experimenting in-game and trying new things.

Because that’s the only way you’re going to get any better.