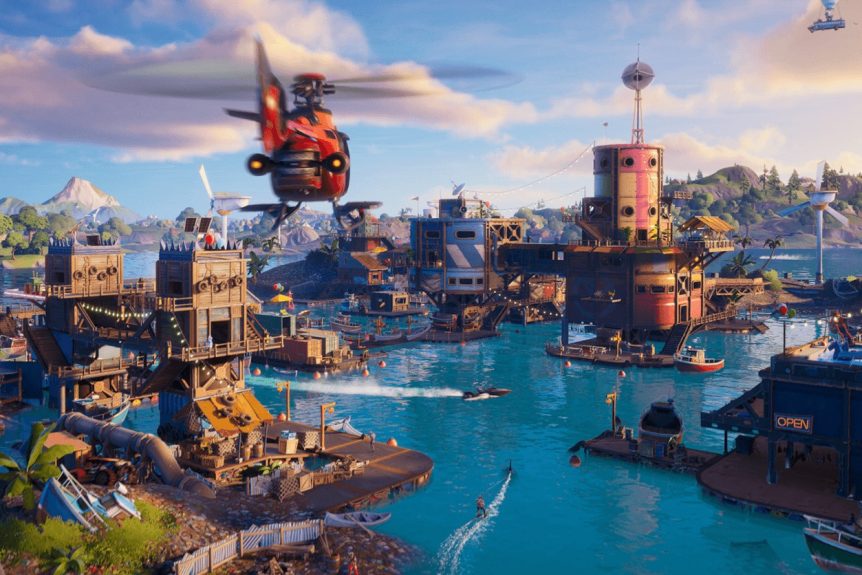 Following The Device event, the map is flooded.

But there’s no longer the water storm.

As time goes on, the water will recede and more locations will be uncovered.

And as the roadways become more open, you’ll discover new ways to get around the map.

As Epic Games haven’t provided us with patch notes for Fortnite Chapter 2 Season 3, here are all the changes you need to know about.

Each new Fortnite season comes with a new Battle Pass.

As always, the Battle Pass costs 950 V-Bucks and enables you to unlock exclusive rewards for this season.

You can get up to 1500 V-Bucks for free just from leveling up your Battle Pass, which is enough to pay for next seasons Battle Pass.

Here are the names of the 7 new skins you can unlock in the Chapter 3 Season 3 Battle Pass, as well as the level you unlock them at.

You can also unlock Aquaman. But you have to buy the Season 3 Battle Pass and complete all 5 Aquaman challenges to unlock the skin.

The 5th and final Aquaman challenge unlocks in 29 days from the release of Season 3.

Also new to the Season 3 Battle Pass is the ability to build your very own umbrella, which replaces the build your Maya skin from Season 2.

Level up your Battle Pass to unlock more umbrella parts and customize everything from the top, bottom, canopy, and the colors.

You must finalize your choices before the end of the season to craft your own unique umbrella.

It appears that the medal punchcard that was introduced in Fortnite Chapter 2 has been replaced with quick challenges.

Quick challenges are challenges that you can complete quickly and easily in-game so you can earn more XP to level up your battle pass.

Within the battle pass tab is the new punch cards, which replaces the daily challenges from the previous season. The punch cards are a way for you to track your progress and earn XP.

When you first look at the punch cards, you’ll notice that they are locked. You will need to experiment on the island to discover punch cards and you can reach milestones in each punch card to earn XP.

There are a total of 49 punch cards to discover and Reddit user Haveireddit seems to have found them all.

As you know, the map is now flooded.

Here are some other important map changes as of the Chapter 2 Season 3 update:

There is a lot to unpack in regards to the weapons in Chapter 2 Season 3.

Chapter 2 Season 3 is here and we have a bunch of big changes.

Obviously, the map has been completely changed.

And the changes to the weapons could drastically alter the meta.

For example, pump shotguns being vaulted and seemingly replaced with the new charge shotgun could change the box fighting meta.

Right now, no one seems to understand how to best use the charge shotgun, and it’s likely it will get adjusted in future updates. So to play it safe, you may want to choose the tactical shotgun.

There is also a nerf to aim assist in Chapter 2 Season 3 that was revealed by leakers on Twitter. This could finally balance aim assist and end complaints from competitive keyboard and mouse players.

Anyway, I’m excited to dive into Season 3 and experience all the new things first hand. I’m also looking forward to seeing how things develop as the season progresses and the water recedes.