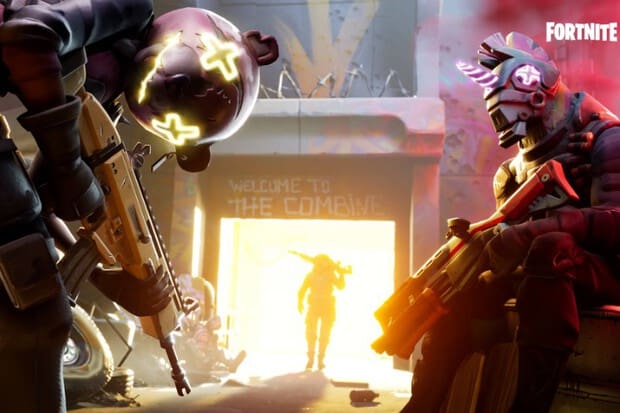 Patch v10.40 has some of the biggest and most interesting changes we’ve seen all Season.

In this post, I’m going to give a quick rundown of some of the most important changes.

So you have a good understanding of what to expect the next time you sign into Fortnite.

As you know, in Fortnite Battle Royale you compete against 99 other players.

Until now, the matchmaking has been completely random. In other words, you could be matched up against a pro player like Tfue, even if it was your very first game.

Of course, this can be very daunting to new players simply looking to learn the game.

But in patch v10.40, Fortnite is introducing “improved matchmaking logic” to the core Battle Royale modes.

This means you’re more likely to match with players of similar skill. And when you get better at Fortnite, so will your opponents.

You can read more about the Fortnite matchmaking update in this Epic Games blog post.

“Bot” is a term used to describe a player that’s new or not very good at Fortnite.

But, in the next season of Fortnite, actual bots are going to be added to Battle Royale.

The bots will give an opportunity for new players to learn and improve. And the new bots will work together with the new matchmaking system.

In other words, as you improve the fewer bots you’ll play against.

The bots should behave similarly to normal players and will not be present in any competitive playlists.

As of right now, it’s unknown whether or not you’ll be able to distinguish a bot from a real player.

But I would think Fortnite would want to keep the bots as indistinguishable from real players. Because it could be disheartening for players to know they died to an actual bot.

The Combine is a new playlist designed to test your Fortnite skills. The goal is to reach the end as fast as possible while eliminating targets along the way.

You can think of The Combine as a warm-up map you play before real games. Or to practice with different sensitivity and settings.

It likely gets its name from the NFL Scouting Combine in which players perform various physical tasks to allow scouts to evaluate the performance of prospects in a controlled environment.

You will be timed and you can compete for the best time on the leaderboard. Each leaderboard has options to sort times by your preferred input device.

You can share your top times on social channels by using the #FortniteCombine hashtag.

Controller sensitivity has been completely overworked in this patch and a new options screen has been added.

For example, you now have 10 sensitivity presets to choose from.

And you can go to the advanced settings screen for much more detailed and personal customization.

On a first impression, some of these settings look confusing. Especially things like “turning horizontal boost”.

Epic Games give the full details in this blog post.

You have the option to go back to the old legacy controls if you want. And you can also copy your basic or legacy settings to the new ones.

But the customization is truly remarkable. So it shows Fortnite is really trying to cater to the controller audience.

You can now adjust your dampening time—the time it takes to reach the expected look rotation speed—to allow for small adjustments. Also, the maximum setting for the Build and Edit mode multiplier has been increased to 5x (from 2x).

Really you can customize just about everything to get your controller to feel exactly how you want.

Isn’t it ironic that after writing a guide about the best Fortnite sensitivity for controller players, Epic Games completely change everything?

As you can see, these are some very interesting changes. And it will be interesting to see how the Fortnite controller player base adjusts to the changes.

In further changes to the controller players, the aim assist system has been altered. This new system applies different aim assist strengths based on how far a target is from you.

Your crosshairs will now turn red when pointing at an enemy that is within effective range, which is anytime before damage drop-off is applied.

Also, with the new aim assist system, the ability to use target snapping (left trigger spam) has been removed.

Here’s a comprehensive post on the FortniteCompetitive subreddit that gives further details about the changes to aim assist.

Of course, any changes to aim assist is bound to spark some conversation amongst the Fortnite community. And that’s exactly what’s happening right now on Twitter and other forums.

So I’m interested to see how this one pans out.

Zone wars will help players quickly simulate the scenarios in Fortnite Battle Royale which are the most difficult to practice.

In other words, the end game zones with many players and a moving zone.

You can queue with up to 15 friends and the spawns and items are randomized, so each round is unique.

Here are the names of the 4 new zone wars maps:

This is another example of Fortnite listening to its community. And I expect the mainstream introduction of zone wars will raise the overall skill-cap of the player base.

And that can only be a good thing.

Season X of Fortnite has been a bit of a disappointment.

Mechs, for example, are one of the most hated updates of all time.

But Patch v10.40 is a promising sign that things are getting better as we move closer to Season 11.

Of course, this post has only given a quick outline of what I think are the most. You can read the full patch notes in here.

What is your favourite change in Patch v10.40? Let me know in the comments below!