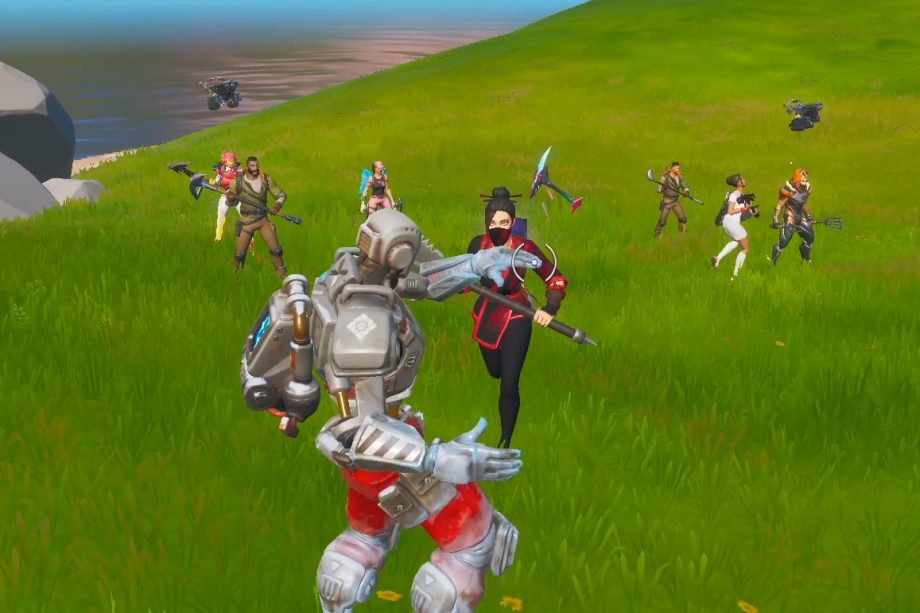 In Fortnite Chapter 2, you could be playing against bots.

In other words, non-human players.

Now you may be wondering why did Fortnite add bots? Well, the answer is simple.

Bots give an opportunity for new players to learn and improve. And the bots work together with the new matchmaking system.

The new matchmaking system is, of course, skill-based matchmaking (SBMM) which was also introduced in patch v10.40.

But you’re not going to play against bots forever because as you improve the fewer bots you’ll face. And bots aren’t available in competitive playlists, either.

You may find it surprising to learn that bots were first added to Fortnite in Season 6 in patch v6.20. Because in this patch we had the Firing Range where you could practice against training dummies in Playground Mode.

Of course, they were nothing like the bots we have in Fortnite today.

How to spot a bot

The problem with bots in Fortnite is that it becomes difficult to tell them apart from genuine players. Because they could be using any skin and have a name that seems normal.

Sometimes I think I know a bot from a real player based on how it’s moving and the decisions it’s making.

And you may also think you can tell a bot apart from real players with amazingly high accuracy. But can you really? How do you know that’s just not a new player?

Fortunately, there are some ways you can tell for sure if a player is a bot or not. And we know this because Epic shared the details in this blog post.

It’s quite easy to assume that a lot of the players in your game are a bot.

But I would recommend against this.

Because you could be in for an unpleasant surprise when that player starts cranking 90s and eventually eliminates you.

Are bots good for Fortnite?

Some players will argue they don’t like bots and would prefer to play against real humans. This is a fair point.

But my response is: If you can’t tell a bot from a human player, what difference does it make?

Listen, the reason Epic Games added bots is to help new players learn Fortnite. The Battle Royale game is over 2 years old now, and a lot of players are very good.

In other words, it’s difficult for genuine new players to drop in and enjoy Fortnite from the start. No one wants to get crushed every game. It’s not fun.

And another advantage bots bring to Fortnite is they can speed up the time it takes for you to get into games because they can fill up the lobbies. Less wait time in between games is certainly not a bad thing.

As you know, bots work together with SBMM in Fortnite. So if you’re playing against them then it’s because of your skill level.

If you don’t want to play against bots, then you’ve got to get good enough that they won’t be in your lobby. Or play the Arena playlists where they aren’t present.

What does it mean to call someone a bot?

If you watch any Fortnite streamers on Twitch then you’ve probably heard them call players in their game bots.

And this has been going on for a long time, since long before bots were in Fortnite.

So what do they mean?

Calling someone a bot is an insult and it simply means a player that isn’t very good at Fortnite.

You see, bots in video games are generally bad because they are added to help new players in the game. So calling someone a bot is the same as calling them bad at Fortnite.

Maybe their movements are bad, or maybe they just don’t build.

Bots shouldn’t be confused with defaults. Yes, a player using the default skin could be a bot, but it’s not always the case.

Also, it’s important to realize that playing video games is a full-time job for a lot of streamers. So, because they play so much, they are very good at Fortnite.

So good in fact they can make players who are above average look like a bot.

Confidence is another reason streamers call so many players bots, too.

By thinking that every player in their game is a bot, streamers can play more aggressively. This makes for more entertaining content, which is great for viewers.

But, it can lead to making a mistake and dying because they underestimated an opponent. When they otherwise would win the fight.

Back in my day, there was another name for bots: “noobs”. Which is derived from “newbies” and means a new or inexperienced person.

Are you a bot?

Everyone at one point was a noob in Fortnite. Therefore, there was a time when we were all a bot (at least, not in the literal sense).

Unfortunately, some of us still are.

Here are some questions you can ask yourself to find out if you are a bot:

If you answered yes to any (or all) of these questions, then I’m sorry but you may be a bot.

But all hope is not lost and there’s something you can do about it. I believe we all have the potential to be great at Fortnite, even the biggest bot.

It will take a lot of time to get good at Fortnite. Because Fortnite is a difficult game (despite what some may say) and there is a lot to learn.

Also, there’s no tutorial. So how are you supposed to learn the game?

Well, that’s one of the reasons I started this website. Here you’ll find many Fortnite guides as well as tips and tricks for Chapter 2 to help you become a better player.

If you’re just getting started, then I suggest you check out this post to help you choose a good sensitivity in Fortnite and this one to improve your aim.

Reading those two posts could help you graduate from your lowly bot status. I wish you good luck on your journey.

So now you know there are really bots in Fortnite, and what streamers mean when they call someone a bot.

And it isn’t that they’re literally a robot. Instead, it’s the way to call someone a noob in 2019.

I don’t know when or why we stopped using noobs to describe new players. I think noobs is a pretty good word.

Plus, it’s less confusing than using bot. Especially now that there are bots and it could be confused with an aimbot.

Anyway, I hope you’re not a bot. But if you are,

Finally, I hope that you are not a bot. And, if you are, then it’s time to get playing and get better!