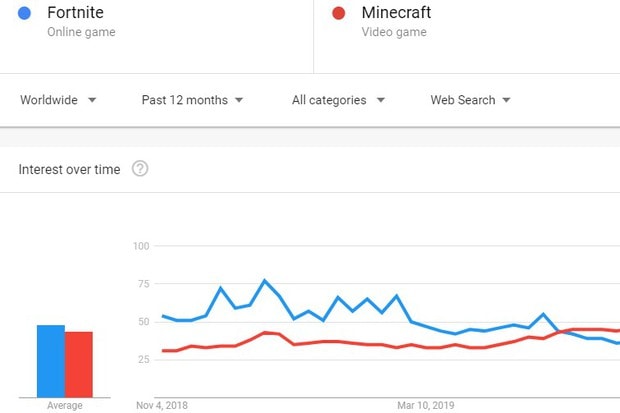 Do you know what Fortnite is?

Do you want to know what is the most popular video game in the world?

Is it Fortnite, Minecraft or something else?

Listen, I will assume you have heard of Fortnite. But if not here’s a brief summary:

Now from that information, you might think that Fortnite is the most popular game of all time.

But is that true?

Here’s Fortnite vs some of the most popular games

The above chart shows the Google search term trends from the 5 most popular video games in 2018.

You see Fortnite is very much in the lead because 2018 was the peak year for Fortnite.

So Fortnite (in the blue) was in the lead for most of the last 12 months. But as of writing in June 2019, Minecraft has overtaken it. Some say Fortnite is dying.

Now I have never played Minecraft. But here are some things I know about it:

League of Legends (LoL) on the other hand, is something I am familiar with because I played it competitively in 2016. LoL is a MOBA and its initial release date was 27 October 2009. It is most popular in Asia, in particular, South Korea and China.

The Asian countries are renown for dominating the competitive scene and winning almost all major international tournaments.

But no data is available from Google Trends in those countries. So, League of Legends could be the most popular game in the world right now. Because China, for example, has a population of 1.386 billion.

What is the most popular video game of all time?

Google Trends lets you go back as far as 2004 to analyze search terms.

Now you see Minecraft (in red) has the most search interest over time.

However, Grand Theft Auto V (GTA5) has the biggest “spike”. In other words, it was the most popular search term at one point in time. This was in September 2013 which was the initial release date.

I still remember that day and the 10/10 reviews it received from sites like IGN. While it couldn’t sustain its search interest, GTAV has remained a popular and successful game because of its online mode.

Roblox is another game I have never played. But here is everything I know about it:

Anyway, what we have learned is that Fortnite is not the most popular game ever.

Yes, Fortnite is a cultural phenomenon that has captured a generation with its defaults and dances. And it was the most popular game at one point.

What is your favorite video game?

Heres what you should read next:

Fortnite vs PUBG According to Google Trends in 2019