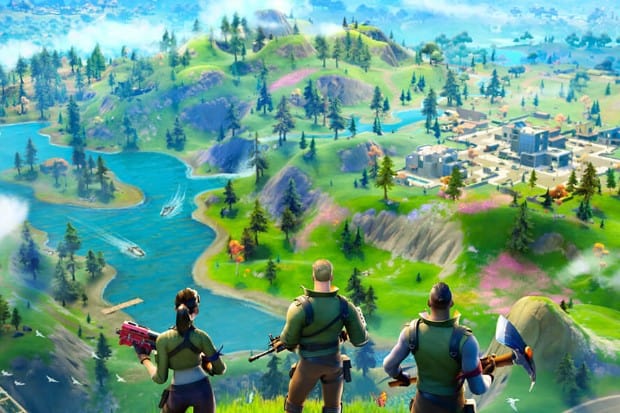 After more than 24 hours of staring at a black hole, Fortnite is back.

Not only is it a new season, but it is an entirely new chapter.

What does a new chapter mean exactly?

Well, lots of changes, of course. And it doesn’t look like Epic Games are releasing patch notes for this update.

Not as they normally would, at least. The only information they have provided is this very brief update.

So it looks like Epic wants us to play the game and figure out the game for ourselves.

But in this post, I’m going to do Epics job and attempt to compile all the changes there are in Fortnite Chapter 2. And there’s a lot of changes in this latest patch to cover.

When you first drop into Fortnite the most obvious change is the new map. As you know, the old one had a meteor crash into it and then it was sucked into a black hole.

But what’s really interesting is the whole map will be greyed out the first time you drop in. And you will have to discover each of the new locations yourself.

You need to discover the named locations as part of a challenge. And there are 13 POIs in total.

Here is a list of the known POIs on the Chapter 2 map:

You may recognise some of the locations from the old and beloved Battle Royale map such as Pleasant Park and Retail Row.

As well as the welcome return of Risky Reels.

Finally! Fortnite are stripping down the weapon pool.

I think this is an amazing change. And it’s something I’ve been hoping Fortnite would do for a while.

You see, less weapons makes the game more simple. And simplicity is key to a successful competitive game. In my opinion, at least.

Anyway, a lot of weapons have been vaulted in Chapter 2, including:

Yeah, a lot of things are now in the vault. Some don’t make a lot of sense because I think they were good for the game.

But I’m sure we’ll see the return of some weapons and items as the game progresses and we get further updates.

Anyway, it’s probably easier to look at what items remain:

Oh, and a new bazooka that shoots bandages you can use to heal your teammates.

The ability to interact with water has been available to a lot of games for a while. Particularly Battle Royale games like PUBG and Call of Duty.

Now Fortnite is on board as you can dive and swim as of Chapter 2.

Along with the ability to swim, boats are added as a vehicle. And you can drive them on land as well as on water. You can drive boats with your friends and you can still fire your weapon when driving. Boat fights incoming.

Another interesting (and weird) mechanic that’s come along with water is the ability to start fishing with the chance to catch an item.

It seems to me that standing in the open with a fishing rod out in a Battle Royale game such as Fortnite would be a terrible idea. Because you’re an easy target to anyone that sees you.

But it’s in the game anyway. And here are some useful things to know about fishing in Chapter 2.

It may be a whole new chapter for Fortnite, but some things never change.

Fortnite are advertising the new Battle Pass as ‘less grind and more fun’. And that will be a big relief for a lot of players that felt the Battle Pass was a grind. So let’s hope Fortnite stay true to their word on that one.

You no longer earn Battle Pass stars to unlock further tiers, either. Instead, it’s entirely based on XP.

You earn XP by doing various different things. And something else Fortnite has added this season is medals and the medal punchcard system to help you earn more XP.

The theme for this Battle Pass appears to be Heroes and Villains. Because each of the 7 outfits you can unlock from the Battle Pass also have an alter ego.

Of course, as with each Battle Pass, you can unlock up to 1,500 V-Bucks. Enough to cover the cost of 950 V-Bucks you spend on the Battle Pass and some extra free V-Bucks for you to spend in the item shop.

You can learn more about the Chapter 2 Battle Pass here.

Changes to the UI

UI stands for User Interface. In other words, it’s all the things you see on your screen such as your health and weapons and so on.

I really like the new look and it gives a fresh new feel to Fortnite. And it suits all the new changes to progression well, too.

As you know, a lot of weapons are in the vault.

But Epic has introduced a new way for you to upgrade the rarity of your weapon.

Did you get a common weapon? Do you want to upgrade it?

Well, now you can. You just need to use some of your material at a weapon upgrade bench.

This adds a new way for players to get to their end game loadout. And an interesting new way to use your extra material.

I have no idea why. So it will be interesting to find out what Epics reasoning for this change could be.

You could always run in Fortnite, but now you can hide as well. Not just in a bush or a building, either.

No. Now you can hide in haystacks and dumpsters to avoid enemies. Or jump out to surprise them when they least expect it.

I imagine this could work well as it’s new and players are still learning. But as the season progresses, more players are going to be familiar with the common hiding spots.

Fortnite could have introduced these new ways of hiding to benefit new players. You see, this is a legit strategy for making it to the end of the game without having to actually fight enemies.

But believe me when I say that playing Fortnite by hiding is not a good long-term strategy.

Because you’re going to fall behind players in terms of your mechanical skill and game knowledge.

Serious competitive Fortnite players are always looking for ways to improve their edit speed. So it’s not surprising that many players have been requesting a release edit button to confirm edit setting for a while.

The ability to release to confirm your edit reduces the number of steps in the editing process from 3 to 2.

You see, instead of pressing a button to start the edit (1), clicking your mouse to select the tiles (2) and then pressing the edit key again to confirm (3).

Now you just need to press your edit key to initiate the edit, click and select the tiles you want and then release your mouse to confirm the edit.

I would have preferred this to have functioned by releasing your edit key instead of the mouse. But hopefully Epic can revisit this setting in the future.

Should you enable release to confirm edit? Find out the answer in this post.

You can carry downed friends and enemies

Previously, when your teammate was downed you could only build to protect them and then revive them when it was safe.

And all they could do was crawl very slowly to safety.

But now you have the opportunity to carry your teammates on your shoulders fireman style for a more dramatic rescue mission.

You can also carry downed enemies. Use this to reposition them to bait their teammate, or throw them from a great height for a dramatic elimination. Your choice.

Sensitivity has reset to default for some players

Some Fortnite players are reporting that their sensitivities and settings have been reset to default as a result of the new patch.

For sure this was not intended and you can set things back to how they were before the update, if you remember them. But it can present a problem if you don’t remember your old sensitivity.

If you’ve found yourself in this situation, then why not take it as an opportunity to try a new sensitivity?

In my sensitivity guide, I analyze the Fortnite sensitivity for hundreds of pro player and streamers. You can check it out here.

Changes to chests and ammo boxes

In Chapter 2 you have there are now 2 types of chests:

And 2 types of ammo boxes:

These additions should help you have a better idea of what’s coming out of your chest instead of it being completely random.

Worsened performance across all platforms

Ah, another unintended and unfortunate change. This time, however, it looks like every player has been hit with it.

As you know, Fortnite Chapter 2 has brought some big changes. And maybe all these changes weren’t well optimized.

So, you could be experiencing less FPS (frames per second) when playing Fortnite during Chapter 2.

As you know, Fortnite Chapter 2 has brought with it some big changes. And unfortunately, players are reporting worsened performance. Specifically, a drop in FPS.

There are some things you can try to fix this and I have outlined them all in this post about improving FPS in Fortnite. Give all those a try and you should see an improvement.

Alright, that’s all the changes I’ve been able to discover in Fortnite Chapter 2.

As you can see, there’s a lot of new stuff and a lot of changes. And I’m not entirely convinced I’ve covered everything in this article.

Anyway, right now I’m just super excited to get playing Fortnite again and to learn and adjust to all the changes.

I hope you’re enjoying the latest chapter of Fortnite. Let me know what your favourite update is and please let me know in the comments below if I’ve missed anything because I want this post to be as accurate and helpful as possible.